If you have watched the news of late, drug prices that we pay are a big item as the price of drugs keeps

going up.  The pharmacy benefit management company is the middle man in between the pharmacy and you.  Their computers connect to the PBM and they are given the price to charge you according to your  agreement and insurance under which your prescriptions fall.

Worth a mention here is that OptumRX last quarter became the biggest revenue producer of their 4 revenue categories.  That’s right they are making more here than any of their insurance groups when compared, more at the link below.  OptumRX gets a double whammy in revenue as their OptumRX, through the acquistion of Cigna is also the pharmacy benefit manager for those insured by Cigna.  Cigna is currently sanctioned by CMS though and and their former benefit manager, Catamaran, which was acquired and integrated into OptumRX was denying patients too many drugs and care.

Of course in this video, which pharmacy benefit management company is heavily connected to claw backs?  United Healthcare, aka OptumRX. You may have wondered why we have the Walgreens and OptumRX agreement right?  There’s claw back money potential here as they state that patients can pay the same at Walgreens as they would getting a 90 day supply via the mail.  Well, when you watch the video, the computers talk to each other and the patient may receive a higher cost than what the Walgreens “no insurance-cash” rate would be.  So what do they do, split the difference with a profit?  More at the link below on how this happens.  Anthem is suing Express Scripts as well on the pharmacy kick backs that the pharmacy benefit management company Express Scripts receives on the sale of drugs.  That’s another avenue in which pharmacy benefit management companies make money, 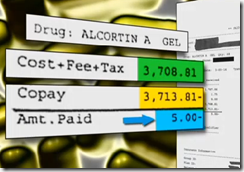 they get a kick back from the drug company on the dollar amount of the drugs that were sold.

Some day if you need infusion drugs, there’s a good possibility a subsidiary of OptumRX, the subsidiary of United Healthcare might pay you a visit for that too as the company they bought operates in 38 states.

When you really want to throw off the entire pharmacy patient “scoring” system, just pay cash for your prescriptions and you’ll be scored by default as an outlier who doesn’t take their meds.  Before you walk in to most pharmacies today, the pharmacists already have you sized up with 300 metrics that have zero to do with taking your prescriptions on predicting whether or not you will.  I think it’s a big farce, costs a lot of money and they sell all of this data to insurers and other people who want to calculate any type of risk assessment on you.  The problem is, the numbers are flawed.

Patients Who Pay “Cash” When Filling Prescriptions Are Now Called “Outliers, Pharmacists Required to Fix Outliers as They Show Up As Nonmedication Adherence Compliant With 5 Star Systems Full of Flawed Data…

Do always ask for the “cash” no insurance price is the moral of this story to avoid pharmacy benefit managers getting a claw back of your money and charging more when they find you could be asleep at the wheel if you will.  In the video they ask what kind of company is that which is supposed to negotiated cheaper prices for you and ends up charging you more?  That’s a good question and of course some of that probably goes to pay for all the software and algorithms that score you on predictions and risk, right?

Sometimes customers are paying more than the drug is worth as well.  Claw Backs don’t occur on every prescription but ask to avoid one happening with you is the best advice.  I had a person tell me they have a son who needs some expensive drugs due to some serious conditions he has and due to the pricing, he has to go to three pharmacies to get all the prescriptions for the best price.  That’s wild when that occurs but that shows how different the contracts are and how the pharmacy benefit management contracts work.  BD

One source for our investigation, a New Orleans-area pharmacist, asked us to hide his identity.  Contracts with pharmacy benefit managers, or PBM's, prevent him from talking publicly.

But documents that multiple pharmacists provided to FOX 8 News show, in some cases, companies are charging copays that exceed the customers' costs for their drug.

Pharmacists call it a clawback - the company is essentially clawing back money from you and, our source tells us, you probably don't even realize it's happening.

“They have no idea,” the pharmacist says.

But many pharmacists, who asked that we not reveal their identities, gave us dozens of examples. They include a $22 clawback on a nasal steroid, fluticasone; $7.85 for a diabetes treatment, invokamet; $12.39 for diazepam, a drug that treats anxiety, muscle spasms and seizures.