Neuromodulation is a growing field to say the least.  There is also this related story below which is using pretty much the same technology.

Sex Chip is to stir up the libido – the latest technology with implanted medical devices? 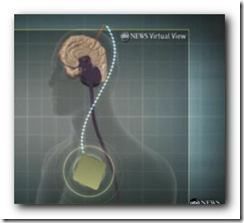 The story below about the banjo player who was helped is quite a success story.  As with any procedure there is a risk of infection and is is no different with devices being implanted.  A drug is a visitor, but a device comes home to live with you.

For other uses, such as depression, you might have to do some real convincing for me at least, although I have had readers comment in the recent past that the device has worked for them, and this was a patient suffering from depression and not Parkinson’s.  Check out the related reading below and watch the video on the banjo player who was helped with the therapy for more information.  BD

A study of brain-stimulation technology for patients with advanced Parkinson's Disease showed treatment helped battle symptoms better at six months than drugs and therapy did, but also caused many more adverse events such as infections.

Medication can help, although not all patients respond and medication can lose effectiveness while causing more side effects over time, according to researchers involved with this study. Doctors have also been using stimulation devices to treat patients for the last decade or so. Medtronic's system was approved for a different use in 1997, but doctors can choose to use devices for so-called off-label purposes.

The technology involves implanting a pacemaker-like device in the chest and then running wires deep into patient's brain, where energy is used to stimulate areas linked to movement issues. Medtronic's system today is approved for essential tremor, Parkinson's and another movement disorder called dystonia, and the company is aiming to win approval for epilepsy, depression and obsessive- compulsive disorder.

The Future – A Day of Going to the Doctor

What is Cyberchondria and Who Has it?

FDA Clears Neurostar® TMS Therapy For The Treatment Of Depression

Many illnesses may be in for a shock - The Brain Defibrillators