This is nice to restore vision, so far there are 17 people with the device and it is reported to working for all.  There are clinical studies going on as the device is listed with the FDA as being investigational.  The system works with a pair of eyeglasses aiding the process, but gee, what’s a pair of glasses when you can’t see at all.

The glasses have a transmitter that sends that information wirelessly to a receiver attached to the surface of the eye.

After than happens there’s a tiny cable to an electrode array implanted in the retina, stimulating it to emit electrical pulses. The pulses trigger signals in the retina that travel through the optic nerve to the brain, which perceives patterns of light and dark spots that correspond to the electrodes stimulated.  Sounds pretty complicated with all the processes.  There are a couple other companies doing similar research as well in the article mentioned. 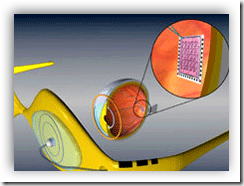 Much of their research is supported by the NIH.  BD

Patients eligible for consideration in this study are those who:

- Have functional ganglion cells and optic nerve as determined by documented light perception or a measurable electrically evoked response.

- Have a history of former useful vision in the worse-seeing eye.

- Are fifty (50) years or older at the time of enrollment.

- Reside within two (2) hours distance (by ground transportation) of the investigational site.

- Are willing and able to comply with the protocol testing and follow-up requirements.”

When vision fails, it's often the result of damage to the eye caused by an injury or degenerative disease. In an attempt to restore such vision loss, researchers for more than a decade have been working to develop an optical prosthetic that can restore sight by delivering images directly to the brain. And it appears they succeeded. The BBC reports that a 73-year-old man identified only as Ron, who received an optical implant at Moorefields Eye Center in London last summer, can see again for the first time in 30 years.
The BBC hails the Argus II prosthetic—made by Second Sight Medical Products, Inc., in Sylmar, Calif.—as a "bionic eye," although it's actually wireless communication system implanted in the damaged eye that captures images and relays them to the brain.

The system works with the aid of eyeglasses, which hold a camera mounted on one of the lenses that captures images and sends the information to a video processor, also located on the glasses, according to the description of the technology on Second Sight's Web site. After the video processor converts the images to an electronic signal, a transmitter on the glasses sends that information wirelessly to a receiver attached to the surface of the eye. From there, the information is sent through a tiny cable to an electrode array implanted in the retina, stimulating it to emit electrical pulses. These pulses trigger signals in the retina that travel through the optic nerve to the brain, which perceives patterns of light and dark spots that correspond to the electrodes stimulated.

Bionic Eye Implant May Give Sight to Blind