I have been asking this very same question in a few prior posts, is this a health insurance company or has it evolved to the point of being a technology focused company with business intelligence software to drive down costs.  One item worth mentioning too is not only the large profits they made second quarter, but the extent of how the company is entrenched in so many different areas of healthcare, a big portion with the subsidiary Ingenix who does everything from EMRs to selling your medication records to other insurers so they can evaluate your health to see if you are a qualified candidate to insure.  There’s quite a few links from prior posts listed below for additional information.

UnitedHealthCare CEO – “Our Shareholders Will Prosper”

The story makes note of the big Cisco/United Trailer parked in Washington where members of Congress were able to take a tour.  I sometimes think 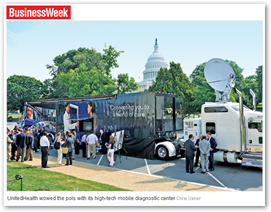 of the many times I have shown off new technology to doctors, they are fascinated with a tablet for example, play around with it for about 15-20 minutes and then go back to picking up their pencil and paper. I am wondering if perhaps the same venue might be apparent here with Congress, did they look and like, and then leave to go back to old methodologies saying this is nice, but themselves not ready to take a plunge to try it out.

My own view on the technology is positive as I can see it reaching many individuals who normally would not have the ability to see a physician in rural and even metropolitan areas, but what is the cost and implementation?  Another article I read said the “trailer visit” would be around $200.00, and of course I would think if one used their own web cam and computer from home it would be less.  United is busy recruiting doctors to earn extra money on their own time to provide web consultations and from what I understand Health coaches will either now or soon have the same capabilities for communication.  You can read more a the link below and by going to the OptumHealth site as a physician you can find out the details if you are interested and along with participating comes “business intelligence” information on other physicians and needs in your community as they have mined data to provide a community section that will offer information on how to zero down and best serve the community where you practice, again more statistics and business intelligence information on both how to operate and market your practice.

Now this brings to light another entity I found on the web, located in India and appears to have an Asian backed ownership.  This company allows you to create a free medical record, get free consultations and even send a digital image for a free evaluation or reading, like an x-ray.  The radiology portion is accredited by the Joint Commission.  There is a reason that I mention this too as insurers are also very interested in offshore services and medical tourism, take a look at this link and see where this could have the potential of going since the site states they will work directly with doctors and patients.  There are already many companies overseas who evaluate and create reports for hospital imaging centers either as a routine or when a local radiologist is not available.  Could we see more of this coming online with offshore web cam visits, let’s say if there were not enough physicians signed up to provide that service here in the US, just something to think about and ponder as the technology is there, it would be a matter of policy or laws next.  I say this as food for thought and hopefully to provoke an awakening on where technology is today as so much of what we thought was Sci Fi is here, now.

Here’s a couple paragraphs about the service from the link above.  I hope members of Congress have seen this too.

“Teleradiology Solutions was founded in 2002 by two Yale trained physicians, Dr. Arjun Kalyanpur and Dr. Sunita Maheshwari. It was initially set up to provide hospitals in the United States with night shift radiology solutions. However it grew rapidly and now provides teleradiology to hospitals in Singapore and India with other countries on the anvil.
Teleradiology Solutions (US) is accredited by the US Joint Commission of Accreditation of Healthcare Organizations (JCAHO). It is also the first organization outside Singapore to be accredited by the Ministry of Health, Singapore.

WebHealthCentre.com brings to you Online Consultation facilities from some of the region’s leading medical institutions and consultants. Here you can send in your detailed medical queries pertaining to various aspects of your health and these questions will be answered by the Consultants in the various specialties. This service is provided FREE of charge and can be utilized by Doctors and patients alike.

There are at present over 20 major medical specialities for which Consultation is available at WebHealthCentre.com. Each specialty has a specially prepared detailed form encouraging you to provide as many details as possible. This is to ensure a more accurate reply.
Newer specialties, institutions and consultants from different regions are constantly being added.”

These are just some things to keep in mind when we hear statements to the effect that “Our Shareholders will Prosper”.  Again this is used as an example but new partnerships and services develop every day and hopefully as Wendell Potter advised us, good healthcare with insurers needs to be on a “watch” and not fully trusted, and we can all attest to that with Wall Street and what money does and hopefully it is here to help and not deny services based on cost.

United is getting pretty close to having a monopoly type investment in so many areas, it is one company that gets fined, says they did no wrong and just keeps on moving, no real regulations and they somewhat appear to function as they see fit, again some good and maybe some not so good.  We have all seen in the past what happens when one company gets too large and powerful and this may in fact be what is happening here.  Companies at that point usually come under some government agency like the SEC to divide the interests.

They also make money from other carriers from the technology side of their business, like Ingenix did with other insurers using their proprietary algorithms to calculate out of network charges which were found to be out of proportion and that data base is no longer in use due to the NY Attorney General’s case.  I believe it was only a few days after winning the Tri-Care contract from the prior contract holder, HealthNet that it was announced that United would take over a big chunk of the HealthNet business in the northeast.

Whatever the case may be, a government plan, stricter regulations that are enforceable with data audit trails and not just the “trust me” handshake, there needs to be some balance created soon, otherwise the big fear of a government plan may not be the big threat folks are thinking it could be, and it might very well be United running the entire show instead, think about it, they are the ones with the algorithms and business intelligence they have been building and using for years.  Hospitals and States use their business intelligence to help fight fraud, but is there a fine line that could get crossed here?  If nobody is minding the shop it sure could, again remember Wall Street?  BD 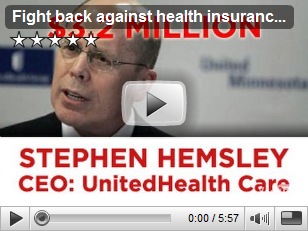 As the health reform fight shifts this month from a vacationing Washington to congressional districts and local airwaves around the country, much more of the battle than most people realize is already over. The likely victors are insurance giants such as UnitedHealth Group (UNH), Aetna (AET), and WellPoint (WLP). The carriers have succeeded in redefining the terms of the reform debate to such a degree that no matter what specifics emerge in the voluminous bill Congress may send to President Obama this fall, the insurance industry will emerge more profitable. Health reform could come with a $1 trillion price tag over the next decade, and it may complicate matters for some large employers. But insurance CEOs ought to be smiling.

UnitedHealth brings a mixed record to its role helping to guide health reform. The company has repeatedly hit smaller employers and consumers with double-digit rate hikes in recent years, far greater than the overall rate of inflation. An investigation last year by New York's Attorney General will force the company to stop running two huge databases used widely within the insurance industry. By allegedly setting medical reimbursements too low—that is, skewing statistics in favor of insurers by understating "usual and customary" physician fees—the databases had resulted in the overcharging of consumers by billions of dollars nationwide. In January, UnitedHealth agreed to resolve the situation by paying $400 million in a pair of agreements with the New York Attorney General and the American Medical Assn., although it didn't admit any wrongdoing.

Perhaps more than any other insurer, UnitedHealth is poised to profit from health reform. Its decade-long series of acquisitions has made the company a coast-to-coast Leviathan enmeshed in the lives of 70 million Americans.

"We are extremely well positioned for a much broader adoption," says Dawn Owens, OptumHealth's chief executive. Her division, based in Golden Valley, Minn., already boasts $5.2 billion in annual revenue.

CalRHIO in Orange County to Work with United Health Care

State of Washington Awards Contract to Ingenix (Subsidiary of UnitedHealthCare)

Algorithms, Formulas and Investigations leads to AARP suspending sales of some health plans

Corporate Wellness Programs Still Remain Illusive – The Back Side of Business Intelligence for Profit?

Discrimination and Health Insurance: Big Brother in the Workplace and Beyond