Vanity hurts, well in this case it does as this procedure is pretty severe.  Muscles, nerves, tendons, etc. all have to be forcibly moved in order to

screw in the plate this type of surgery requires.  There is one center in New York that has somewhat become the pronounced specialty area to go to have this done, Hospital For Special Surgery in NYC.

The surgery is not cheap and the consultation is a minimum of $1,000 or so.  The US has standards and to have the surgery here if you are female, you need to be under 5’3” and for a man 5”9 or less.  Other countries will operate on taller individuals.  This type of surgery is done to help those with bone problems, etc. and now it has evolved to the cosmetic level.

Additional Information can be found at this site as well.

Russia is doing quite a few of these types of surgeries and one clinic advertises, the Ladisten Clinic.  A couple pictures below show the before and after, and I don’t what happened to his pants, you can see the same pictures at the site and more with others that repair bowed legs and other types of real problem issues that are not cosmetic too.  Before surgery he is shorter than the doctor and afterwards he towers over him in height, so I think this was the case of an “extreme makeover” here in the leg department as he grew a lot more than 2 inches it appears. 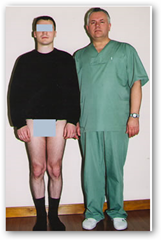 The procedure was actually developed in Russia and more about the device can be read here as Wikipedia.  Recently in the news a 31 year old lawyer from Australia spent a lot of money for the procedure and 9 months in Russia before her return, will it make her a better lawyer? 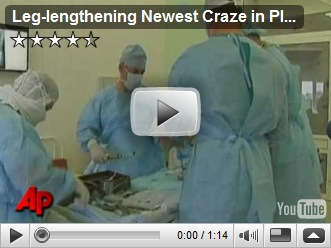 The Implantable Limb Lengthening Device will be attached to your leg during surgery. It has a telescopic rod that is inserted in a small incision and will

be put in through the marrow of bone in the leg with four screws. After surgery the more movement of the leg, the more the growth is promoted.  The average lengthening is 2 inches, but some nuts have had it redone to gain more height.   This man here called Jack, reported back that it was the worst mistake of his life, perhaps not because it it working or not working, but the pain and recovery.  Like any surgery you are still subject to infections, etc.  BD

World Wide list of Facilities that Perform this Surgery

Limb lengthening is a surgical technique that can be done to treat medical conditions or make someone taller for cosmetic reasons. The thighbones (not seen here) are sawed apart and an implant is attached in the break to add length to the bone. According to a Details magazine article, around 4,000 people around the world have had cosmetic limb lengthening (CLL) surgery. Apparently, it's an increasingly popular procedure for medical tourists who go to places like Brazil, China, and Egypt where the surgery is cheaper.