J and J Gets 1.7 Billion Wins Battle, Doctors, Hospitals and Patients Lose on the High Cost of “Legally” Patented Stents

One comment I have to make here is that this certainly doesn’t help the cost of stents for people who need the medical side of this.  This is the big part of healthcare costs that does nothing for the patients, but rolls up big bank rolls. This also brings to the forefront the growing lack of patience on the side of consumers to see money spent in courts fighting over patents. The patent office and intellectual property rights are changing simply due to the fact that we are now emerging as a “global economy” and you know what, the average patient when they read something like this says “who cares”. 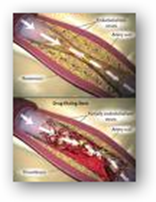 When you read further it states that Boston Scientific has settled 17 patent cases with J and J during the last year, what a waste of time when it comes to developing lifesaving technologies, these are “dollar” saving technologies as relates to court cases.

Legal costs and court cases as such are one of the culprits today and again it kind of goes back to what the President said in his “Behavioral State of the Union Address”. In my estimation, this is just plain stupid that 2 companies, much like the folks in Congress could not come to terms, so in reality when dealing with companies that run to the legal process to gamble on whether or not a patent was violate, spend over 5 years doing it, and yes there is one winner here, but unfortunately it’s not the patient.

Shame on both Boston Science and J and J for not being able to reach a settlement on this prior, it’s all about the money.  The Wall Street Journal made one interesting comment about the case too, the amount of the award exceeded the annual “stent sales” of Johnson and Johnson, so was it more important to stay in court or make stents?  If you happen to be a patient needing a stent someday, remember it’s the futile court battles of such that is adding to the cost of your procedure.

Also for the record here, did you know that due to the dollar value to stents, that most hospitals anymore do no buy them up front?  Instead the various stent companies place them on “consignment” at the hospital, so the hospital has them readily available but is not charged until they use them.  What does this add to the fact that money is tight at the hospitals?  This also brings up another one of my pet projects here too, Tagging these things, since the the value is so high.

The settlement represents the final chapter in a court battle that dates back to 2003 when Johnson & Johnson sued its rival medical device maker Boston Scientific for allegedly infringing two stent patents.