see your face.  The article states the software can also predict when you might start yelling too.  It is being used in sales and marketing and if that is the case if I am not interested and it disconnects the marketer, then 3 cheers for that!

Like anything else in software it is not 100% so thus you could get some false positives, like a false warning at the other end that you may be ready to yell.  It states here that 17-24 % of the predictions are not correct, or maybe this means you are going to politely scream instead of a total blow out (grin).

In healthcare, like with autism though this could really be helpful to get a little insight as that is an area of difficulty.  Now the next claim is a little bit out there I feel, when the software claims to be diagnose prostate cancer from a voice.  I’m going to send that one up to an expert and see what I hear back I think.

“According to Levanon, a person with prostate cancer has a "Grand Canyon" of missing tones that is "catastrophic to the voice."

We analyze others voices all the times as humans and now software is going to do a better job?  That’s taking some of the fun out of every day conversation a bit,

don’t you think?  On the other hand there folks that don’t get voice tones and maybe this can help them I guess.  It also states that it could help with medication compliance, so how does one sound that missed their meds?

“eXaudios has developed Unique Technological Platforms that represent major advances in understanding the emotions conveyed by voice, enabling call centers, recruiters, security and law enforcement agencies, media, home users to significantly improve their capabilities and effectiveness in ways and means that did not exist until now.” 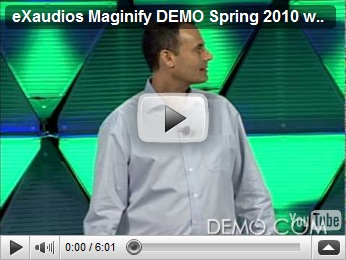 The company has a website where you can try this out and see how it works.  You need to download an applet and talk.  Emotionalysis is the name of the technology.  Another added thought here too is it says you can’t lie or fake your emotions, a phone lie detector of sorts.  Sometime I feel I am writing a Sci-Fi blog at times instead of healthcare.  I guess if the voice detection can tell if you have prostate cancer there has to be an algorithm of tones for taking meds too.  The test site has the disclaimer that “it is for entertainment only”.  Right now for me, I’m not quite that curious to test as I know how I feel, and I am not really anxious for someone else to be using this software when speaking with me about subscribing to the newspaper for example (grin). 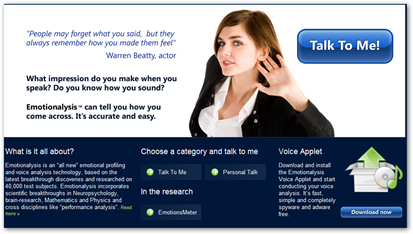 Hey folks I just thought of something else here to watch out for with health insurance companies using this in risk management, I didn’t see anything here but I

wouldn’t put it past them to give it a try and for that matter any company that outsources their call centers to countries where English is not the native language, watch out for the next move in behavioral prediction on the move.

As the article mentions too there is a company in the US working with this type of technology too, called Cognito Health.    When used, I also wonder if our Congress will look into requiring a disclosure to the party on the other end that this type of software is being used?  I might be dreaming a bit there with so many “non participants” with technology in office today, but perhaps they may see this post, I hope.  BD

Less than two minutes into a cell phone conversation, a new computer program can predict a broken heart -- literally and figuratively.

An Israeli company called eXaudios has developed a computer program, known as Magnify, that decodes the human voice to identify a person's emotional state.

Some companies in the United States already use the system in their call centers. eXaudios is even testing the software's use in diagnosing medical conditions like autism, schizophrenia, heart disease and even prostate cancer.

"When agents talk with customers over the phone, they usually focus on content and not intonation, unless the customer is screaming," said Yoram Levanon, President and CEO of eXaudios, which recently won a $1 million prize at the Demo 2010 conference. "If a customer is screaming, you don't need the software. But if we can identify the other emotions of a customer, we can save customers and companies money."

When Discovery News' technology correspondent's voice was decoded using the Magnify software, the output read like a psychologist's notebook: "Struggling to contain an inner excitement. Keeping emotions and/or creativity in check. Warm and fuzzy.