You can read the entire article at the New York Times but in essence the President ran out of folks who could help him out with the technological war far that is occurring and thus has reached out and grabbed William M. Daley who 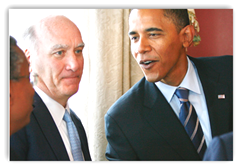 works in the financial industry. They work worth with algorithms day in and out and while Mr. Daley may not be a hands on person, believe me he knows his “Algo Men” as all the banks have quite of them.  How in the world do you think they strategize and write their code.  Remember the case where Goldman put a former employee in jail over this?  Give some thought here, how valuable is that code?  You should be able to figure that out by now.

The world has changed in 2 years, a lot.  In healthcare we have some hands on IT folks coming to the helm as well, and in reality that should have been done 2 years ago with the Director of HHS needing more Health IT background than negotiation skills as that’s just the world we live in today. Again too I will mention as I always do is that everyone needs to be a participant and I would love to know how many of the government folks in healthcare actually support he Surgeon General and take any initiative to establish a personal health record?  Probably very few from what I read in the news and hear as they never talk about it.  That’s really another topic for another time with one of my “its for those

guys over there” themes.

In recent months, look at who the president has been meeting with, Bill Gates and Steve Jobs who are the ultimate kings of code and software, so I think he’s getting it on what he needs to do.  One thing that Bill Gates mentions a lot and spoke at Berkeley about are the “hybrids” of the world, and Mr. Daley from what I have read is one of those.  Bill Gates said those people are going to be the ones in demand.  I wish I were in demand like that as I do  talk (many years in sales) and chew code (used to write software) at the same time <grin>.

His expertise might really come in handy with having strong group of Algo Men to help on the battle ground with High Frequency Healthcare too.

on Wall Street so any algorithms generated that create profits and run in the shortest amount of time seems to be where the focus is at and the the loss of ethics in remembering this time we are focusing on human lives.

It’s not the need to save money as that is there anyway and cutting some of the high frequency methodologies in healthcare with machine guns might help and get some better design, but it’s rather the methodologies insurers use and that makes a case that sucks for everyone who becomes a patient.

With healthcare it’s time we should be able to stop feeling like a “commodity” laying in a hospital bed, which is the way finance looks at it when it comes to money and we need a balance between saving money and treating people like humans.

This should be an interesting time to see how the change works and maybe Congress might get some Algo Men who are impartial and quit listening 100% to those lobbyists.  BD

WASHINGTON — He is a top executive at JPMorgan Chase, where he is paid as much as $5 million a year and supervises the Washington lobbying efforts for the nation’s second-largest bank. William M. Daley also serves on the board of directors at Boeing, the giant defense contractor, and Abbott Laboratories, the global drug company, which has billions of dollars at stake in the overhaul of the health care system.

Mr. Daley, 62, who is not close friends with Mr. Obama, even though both share a Chicago base, has a well-rounded résumé. It includes work as a lawyer in private practice , a bank president, a telecommunications company executive, a political strategist, fund-raiser and campaign chief, a lobbyist for foreign corporations (he advocated on tax matters for Nestle and a Canadian petroleum company) and a three-year stint as commerce secretary in the Clinton administration. His brother, Richard M. Daley, is departing after six terms as mayor of Chicago, where his family has an almost royal status.