we have a video from Johns Hopkins where they have simulated a surgical procedure using gestures.  As the article states this is in the early stage here, but it’s been done and seems to be working pretty well during play time here.  The link below tells about the University of Washington and what they have done. 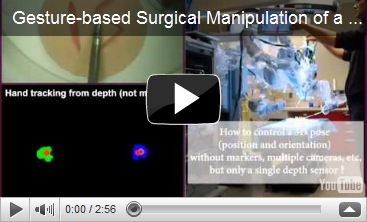 The big area with using robots for the surgeon is the lack of touch and being able to feel when doing a surgical procedure, which means an accidental cut of an artery, or any other unintentional move of the robot device.  The University of Washington is looking at Microsoft Kinect to be a potential solution here and for $150 it’s a deal.  Granted there needs to be some additional updates created such as a higher level camera and high resolution and the surgeon

We have a very expensive million dollar piece of surgical equipment working with a $150 X-box device, amazing.  If you have not had enough, see the link below on how Kinect works with PACS servers in dishing up images.  BD

We've seen several innovative, beautiful and downright freaky Kinect hacks so far, but we've never seen one with quite such a fascinating hint at the future: A researcher has wired up Microsoft's gaming toy, via an appropriate bit of interim hacked code, to the input interface of the da Vinci multi-armed surgical robot. This device, you may remember, is increasingly entering service as a genuine remote-presence surgical tool--it's even been used to perform tricky prostate surgery. It's a serious piece of million-dollar machinery, and marrying it with a gaming toy seems odd when people's lives are potentially in play. So how does the hack work out?