The final results of each endpoint of the trials is to provide a “cure” as stated in the press release, so this is big news if chronic genotype1 hepatitis C virus can be literally cured.  When you read further here there are actually 2 trials with 2 different types of treatments.

“The primary endpoint of each trial is sustained viral response (SVR), which is considered viral cure.”

“BI 201335 is an investigational oral HCV NS3/4A protease inhibitor, discovered from Boehringer Ingelheim 's own research and development, which has completed clinical trials through Phase 2b (SILEN-C studies). This Phase 2 program supports the investigation of BI 201335 in Phase 3 trials. Boehringer Ingelheim is also developing BI 207127, an NS5B RNA-dependent polymerase inhibitor that has completed Phase 1 clinical trials. Phase 2 trials evaluating BI 207127 with BI 201335 in interferon-sparing regimens, both with and without ribavirin, are currently underway. “ 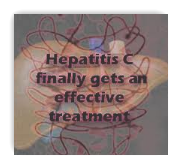 Both treatments involve taking a pill once a day and the FDA by giving fast track approval wants to ensure the drug is available as soon as possible.  Recently their blood thinning drug Pradaxa, an alternative to Warfarin was approved as they are busy moving into the old Amgen building they purchased in northern California.

Also in the news recently were Merck and Bristol-Myers with their Hepatitis C drugs for cures.  Hepatitis C, known as genotype 1 is the most prevalent form of the disease in the Americas, Europe, and East Asia.  BD

The U.S. Food and Drug Administration (FDA) has granted Fast Track designation for the development programs for BI 201335  in combination with pegylated interferon and ribavirin and as part of an interferon-free combination with the polymerase inhibitor, BI 207127, in chronic genotype-1 HCV patients. Fast Track is a process designed to facilitate the development and expedite the review of drugs to treat serious diseases and fill an unmet medical need. The purpose is to get important new drugs to patients earlier.

BI 201335 will be evaluated in multiple randomized, double-blind, placebo-controlled trials in combination with pegylated-interferon and ribavirin (PegIFN/RBV), the current HCV standard-of-care (SOC). The Phase 3 trials include two studies in treatment-naive and one study in treatment-experienced chronic genotype-1 HCV patients.

The two studies in treatment-naive patients will be conducted in the European Union, Japan, the U.S., Canada, Taiwan and Korea. The study in treatment-experienced patients will be conducted in the European Union, U.S., Canada and Japan. BI 201335 will be dosed once-daily at either 120mg or 240mg for 12 to 24 weeks, in combination with PegIFN/RBV for 24 to 48 weeks. The primary endpoint of each trial is sustained viral response (SVR), which is considered viral cure. These studies are part of a broader Phase 3 trial program expected to commence in the second quarter of 2011.

*Final results of the Phase 2b studies SILEN-C1 and SILEN-C2 for BI 201335 were presented yesterday at the International Liver Congress™ 2011, the 46th Annual Meeting of the European Association for the study of the Liver (EASL) in Berlin.