This further proves the case that we need some focus and the right technology to understand and drill down on the complicated wording used relative to copyrights on videos.  It’s a changed world today and the same laws that were put in place a while back need an update.  Laws don’t last forever with emerging technologies and it’s apparent that we have some groups that don’t subscribe to this philosophy. 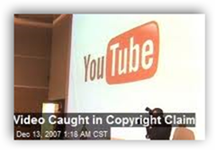 On Edwards, we have all buried this and moved on, give it a break and be done with it.  It’s a waste of taxpayer money and nobody cares anymore, as I said we have moved on.  There are more important issues to focus on like the behaviors of banks and big corporations that have an impact on our lives.  I didn’t care for what Edwards did, but let it die and move on.  We simply just can seem to find focus any more and witch hunts still prevail and why this is even newsworthy with Edwards is beyond me.  I agree with the opinion in the Wall Street Journal below, we have more important issues at hand.  I see the link below as more vital then the garbage here with Edwards and YouTube videos.

They need more technology in Congress to mine and find the information they need and when IBM Watson was demonstrated they sadly only saw this as a game, but Wall Street is ready for it, so what does that tell you about the caliber of the folks making laws?  It tells me we have a lot of non participants with technology who live in a world of distraction and denial.

Video digital media is exploding all over the web and we have this “bill” they struggle with on the books to propose this ridiculous stipulation that will ruin everything for everyone.  We all pretty much know what is and what is not acceptable but sometimes even that gets gray out there with video content.  Jails are already full so even enforcing such a law is a lark at minimum.  Perhaps a little  more participation in social networking would wake some folks up.  BD

Okay, this is just getting ridiculous. A few weeks back, we noted that Senators Amy Klobuchar, John Cornyn and Christopher Coons had proposed a new bill that was designed to make "streaming" infringing material a felony. At the time, the actual text of the bill wasn't available, but we assumed, naturally, that it would just extend "public performance" rights to section 506a of the Copyright Act.

Supporters of this bill claim that all it's really doing is harmonizing US copyright law's civil and criminal sections. After all, the rights afforded under copyright law in civil cases cover a list of rights: reproduce, distribute, prepare derivative works or perform the work. The rules for criminal infringement only cover reproducing and distributing -- but not performing. So, supporters claim, all this does is "harmonize" copyright law and bring the criminal side into line with the civil side by adding "performance rights" to the list of things.

Furthermore, as we suspected, in the full text of the bill, "performance" is not clearly defined. This is the really troubling part. Everyone keeps insisting that this is targeted towards "streaming" websites, but is streaming a "performance"? If so, how does embedding play into this? Is the site that hosts the content guilty of performing? What about the site that merely linked to and/or embedded the video (linking and embedding are technically effectively the same thing). Without clear definitions, we run into problems pretty quickly.

So yeah. If you embed a YouTube video that turns out to be infringing, and more than 10 people view it because of your link... you could be facing five years in jail. This is, of course, ridiculous, and suggests (yet again) politicians who are regulating a technology they simply do not understand. Should it really be a criminal act to embed a YouTube video, even if you don't know it was infringing...? This could create a massive chilling effect to the very useful service YouTube provides in letting people embed videos.