Medco is a large pharmacy benefit manager that most are probably familiar with.  They have 2 locations and all the filling, printing, etc. of your prescriptions is done via automation.  You can use this link to view a video and watch how it is all done.  While the orders are being filled in the

factor, they are printing the information upstairs in the offices to go along with the prescription.  During the interview, the gal asks “do you have any real people working here'”, again this relates to the high level of technology used and they further elaborate on how much faster they are than the retail pharmacy we use as well.

In the news this week, Medco stated they were not actively looking to purchase other companies, but will keep the doors open to prospect when opportunities become available.  Many companies now in their benefits packages are using mail order/internet pharmacy benefit managers as the default selection, so to use a local pharmacy you need to select that choice over a mail order PBM.  BD

Medco Health Solutions, Inc. (NYSE: MHS) today reported record third-quarter 2009 GAAP diluted earnings per share of $0.69, up 19.0 percent compared to $0.58 for the third quarter of 2008. Adjusting for the amortization of intangible assets that existed when Medco became a publicly traded company in 2003, third-quarter 2009 diluted earnings per share increased 19.0 percent to $0.75, from $0.63 in the third quarter of 2008. With continuing strong performance expected for the remainder of the year, GAAP diluted EPS for 2009 is now projected to grow 21 to 22 percent. On top of this increased 2009 growth expectation, 2010 GAAP diluted EPS is projected to grow an additional 17 to 22 percent.

Medco continues to demonstrate strong momentum in the marketplace. Annualized 2009 new-named and net-new sales stand at records of more than $10 billion and more than $8 billion, respectively. For 2010, annualized new-named sales climbed from the $2.8 billion reported last quarter to $4.1 billion, and net-new sales have also surpassed the $4 billion mark. 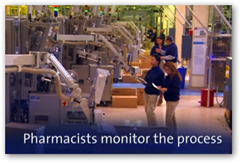