Home » Insurance » Medically Related » My Commentaries » Technology » Data Scientists/Quants in the Health Insurance Business–Modeling Beyond the Speed and Capabilities of Humans To Keep Up With The Affordable Care Act–Turning Into A World of Killer Algorithms That We All Hate.. 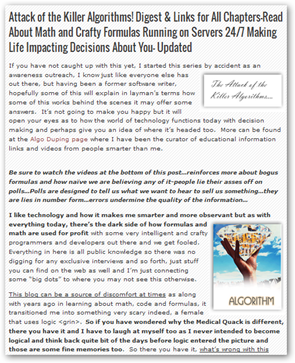 This is what we all dislike about healthcare today, the constant changes as we no sooner adjust to one change and there’s 10 waiting for us.  The pace of what is happening in the world of health insurance is becoming more than most can fathom at times.  Health insurance companies are fine tuning all their profit lines and that means shifting, changing doctors, changing hospitals.  The pace has picked up so much with analytics and subsequent contracts, people are now having problems finding a doctor and a hospital in the same policy at times.  I’ve written about that issue a couple of times.  A few months ago, I somewhat blatantly stated that Obamacare is a bunch of broken or killer algorithms as they don’t work together.

We have all known what open enrollment is and that puts you in place with an insurance plan that is supposed to cover your for a year, but it’s not working that way with all the constant changes that are happening today.  The Affordable Care Model when it was designed has indeed come with a lot of surprises and it depends on IT Infrastructures of health insurance companies to work with the government and we have all read tons of stories where that is not the case and that is what we hate.  Anybody in Health IT knows the website will be giving back glitches for some time to come with the way the launch was handled, by novices making the decisions to open it up before it was ready.  At this point that is spilled milk to talk about; however the subsequent data issues are not and new glitches will arise every time an algorithm that functions on the site is modified or a new one is added.

Health insurers are now more than every hiring more Quants for analytics, just look at the classifieds sometimes.  In addition they have a bit of a data addiction going on with collecting everything and anything they can that gives information about us, for fear they might miss something.  I said they are going off a cliff with non relevant data and when we reach the point to where all of this data, cost to process, etc. reaches the point to where there’s no ROI or it costs more to process than the value, perhaps some of this will chill off a little bit.

In addition, we all pretty much know by now about the data selling epidemic that is happening in the US and that supplements the cost of processing data, yes selling our personal data.  It’s a monster out there and is adding to accelerated loss of dignity for consumers as well as not allowing for enough privacy.  Consumers at some point will totally revolt when the banks and corporations over step their bounds and when their algorithms really become more of a menace than a utility and I think in some area we are there now.  I used to be a developer and it’s not hard at all to follow the money and the code and figure out what’s going one as once you’ve been a query monster yourself you know how the addictive process works to try and find some value.  The problem is today is that a lot of this is driven beyond the real cost of running a business.  Software and analytics is the easiest thing in the world to sell and make a case to the buyer.

It’s only later the buyer see’s what they bought and a lot of it has no ROI.  Furthermore this becomes even more exaggerated to somehow look and see if they can find value with use in another fashion or context and then the fun starts with quantitated

justifications for things that are not true.  More at the link below on that juicy topic and scroll down and watch video #1 in the footer “Context is Everything” and you’ll have a better idea of the madness.  Right now with big data everyone thinks they are missing some big pot of gold, and after money, time and expense of working with the data, sure there might be some revelations but it’s the pot of gold or the algorithmic fairies they thought they bought at all.

Below is  a really good interview with Quant Cathy O’Neill and if you don’t know what a Quant does, tune in.  Keep in mind she goes back to her time at a hedge fund but the same mentality is working at health insurance companies, they forget there are humans attached to those numbers and we are seeing it now in healthcare with this constant shifting, constant variables that we can hardly live with.  Some quants have left hedge funds and now work for insurers.  Again the big thing to listen to here is the mind set of how they function and think.  So next time when all the disruptions come down the tubes from your insurance company, keep in mind this is the mind set of the quants that work there and the models they design.  It’s almost a game she says at some point and why shouldn’t we take advantage as we are smarter than you are and the talent is the brain and math power.  She’s also writing a new book called “Weapons of Math Destruction” and I don’t know when it will be out but keep that thought.

Again the mindset of people who create these models are almost bliss to the fact that there’s people that have to work and adjust to what they create and sometimes the models are broken and they are pushed on consumers anyway as they mean shareholder profits.  She left the business as she felt it was wrong using math models in such a fashion that messes with and depletes retirement funds.  We all know what that’s about today too as it’s getting worse with risk.  You’ll hear her say they didn’t even want her risk models and went ahead with risky investments anyway.

Another great article from a journalist who sees this as well.  Felix Salmon can’t make it any clearer with this quote from his article…so there you go, models that encourage cheating…anyone ever going to ask about the models and code?  Probably not, there’s too much verbiage to look at to think about this side that executes everything (grin).   He’s telling you the same thing so again this is what’s directing all the action at health insurers today and again they don’t know when to stop.

So this current system is going to break as we are not going to be able to keep up, no matter how much more

complex it gets and the Quants will be there looking for small nooks and crannies to help the shareholders profit.  All of the overdone analytics in healthcare (outside of genomics and science as that is their business with big data) has made our health system worse.  On top of that we don’t even have HHS writing policy anymore, it’s done by the Center for America’s Progression and you’ll find people like Zeke Emanuel who thinks all should die at 75 over there.  He was a big contributor to the ACA and is not much more than a walking/talking commercial for United Healthcare.

This is the real reason all the variables are coming at all of us right and left.  If you want to learn more about how this occurs, click here and visit the Killer Algorithms page which is full of videos from people smarter than me that will explain.  I chose the videos as they are mostly at the layman level so you won’t be overwhelmed but rather better educated on how what runs on servers 24/7 is running everything and as long as we continue to elect people in office who have no data mechanics logic, the insanity of what we are seeing now with Quants at one end and digital illiterates on the side of the government, it’s only going to get worse.  BD