There’s been quite a bit about Meaningful Use Stage Three and other items related to Medicare Reporting.  The problem is the model broke and humans can’t keep up with the complexities that the “non data mechanics capable” folks seems to think are attainable.  We have had a tidal wave of technologies hit along with new mobile apps (some of which are completely useless) and we’re back to the same old thing, “we’re not algorithms” as doctors are humans that are there to take care of us when we are ill and not data entry experts.

This is a full on failure of the ONC office to be able on their own to make such changes.  The ONC is currently run by Dr. 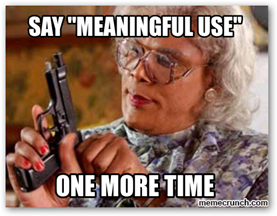 DeSalvo who’s background is clinical and see what happens when you don’t have enough data and code savvy folks on board and in charge?  They don’t get it.  When you look at who’s running HHS, the six degrees of Bob Rubin (former US Treasury secretary and Goldman and Citibank executive) as I call it being Burwell was a former director of his, and Andy Slavitt, a former Goldman Sachs “Algo Man” who don’t have one stick of clinical background, this is what you get, operation-perception.

By the way be sure to advise your Senators to vote no on confirming Andy Slavitt for running CMS as President Obama has nominated him.  In particular he’s one of the big proponents behind all of this reporting.  It’s no big secret if you want to look at reality that United Healthcare and their subsidiaries have been mentoring HHS and CMS models for a number of years.  It all began when Hillary hired Lois Quam from United Healthcare after she was able to get removed from the Department of Justice Lawsuit against United in 2008 where the former CEO left.  Lois Quam while at United was responsible for the PacifiCare take over by United as well as their AARP agreements.  Anyway, read this link below, what did Burwell do to make the news recently…numbers, numbers and more numbers as she too is living what I call the virus of “Stat Rat Fever”, the same thing that hit the VA.  These folks don’t live in the real world.

CMS Chasing Wild Virtual Horses-A Big Distraction on the Hope of Finding Some “Algo Fairies” By Giving Entrepreneurs Access to Medicare Claims and Other Data…Marketing & Astro Turfing “The Sebelius Syndrome”..

Fact of the matter is not only doctors are overwhelmed but so are we as patients.  When you look at the backgrounds again of who’s running healthcare, these Stat Rats don’t have a clue and again without some real technology knowledge, they just assume we as humans can run with new algorithms at the drop of a hat, but we can’t, people don’t work that way.  We’re not algos executing code in a market place.  Most in the Health IT area knew a couple years ago the ONC office of HHS was getting over their heads with complexities and that’s not all their fault but their actions reactions are.  They want to fund their own think tank. 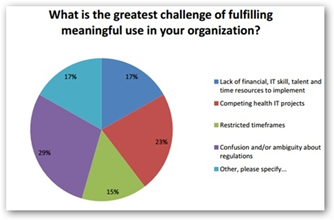 They hired a lawyer from United Healthcare, one of the biggest data sellers out there to advise on privacy.  Does that make sense?

When people get overwhelmed with “broken models” and have to face a government that can’t see this, and we have to rely on Congress to create a law to put them in line, we have a problem.  If this agency can’t admit there are complexities and that reform and changes need to be made quickly, we’re in trouble.  There’s nothing done for the consumer from this office other than to talk about their “data platforms” and no outreach for the Blue Button to even help seniors so perhaps this division of HHS has seen better days for sure.

As a patient wake up as well to see what’s really going on and again tell your Senator to vote no on confirming Andy Slavitt to head Medicare as the reporting and complexities from a one time Goldman Sachs banker at Medicare will get worse.  He’s the same guy then NY AG Cuomo took down and everyone sued for short paying doctors and patients under the Untied Healthcare subsidiary “Ingenix” which is now renamed to “Optum Insights”.

With physicians potentially facing large penalties for meaningful use and other Medicare reporting programs, the California Medical Association (CMA) is urging the California members of Congress to cosponsor the American Medical Association's meaningful use (MU) reform legislation, H.R. 3309, “The Further Flexibility in HIT Reporting and Advancing Interoperability Act” (FLEX IT 2 Act) and to immediately move the bill.

“Physicians are facing a tsunami of Medicare regulations that threaten the viability of our practices," said CMA President Luther F. Cobb, M.D. "H.R. 3309 would provide some important flexibility and sanity in the meaningful use program while advancing interoperability. Medicare could see a significant decline in physician participation and access to care if these bureaucratic programs are not reformed.”

Recently, the Medicare program made a stunning announcement that while 78 percent of physicians are using an electronic health record (EHR) – particularly in California, where physicians have been early adopters – more than 50 percent of eligible physicians will face meaningful use penalties under the EHR Incentive Program in 2015. The Medicare EHR Incentive program was intended to increase physician use of technology to improve care and efficiency. Unfortunately, the program's unrealistic and unnecessary requirements are hindering participation in the program, forcing physicians to purchase expensive EHRs with poor usability that disrupt workflow, interfering with patient care and imposing administrative burdens.