The long and short of the OptumRX agreement is  to allow patients to be able to pick up and fill a prescription in a retail store versus mail order.  That in inself tells me that there’s folks who don’t care for mail order services?  In addition, Walgreens will be able to pick up 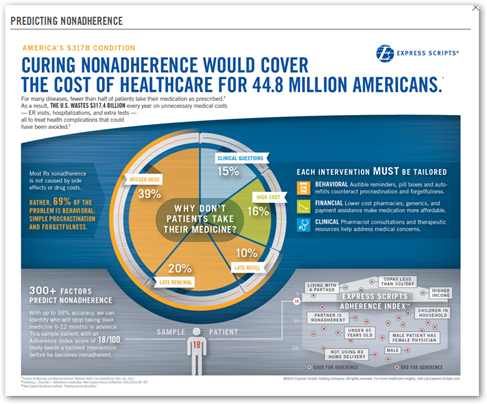 more data to sell as well.  OptumRX does it’s share of prescription data selling as well.  We might see other types of arrangements surface as remember there are two Hedge Fund executives sitting on the board at Walgreens.

Walgreens and United Healthcare have also ventured together on other projects, as in some areas pharmacists gain some P4P money with getting a customer to sign up for the YMCA.  I think there are some matching funds from CDC that come into play here too.  A short while back a pharmacist told me that they were told to only sign up patients with United Healthcare with the YMCA and that would make sense based on this agreement at the link below.

Moving forward Anthem who’s suing Express Scripts wants a judgment that it could terminate its deal with Express Scripts, which goes to 2019, but the Anthem is not sure it would officially end the contract?  Below is where Walgreens was charged wtih over charging customers.  They all want one thing, money.  A couple years ago United and Anthem had a pretty big dispute going and Walgreens is at a disadvantage in the fact that they don’t own a pharmacy benefit manager so are they too going to put more United Healthcare eggs in the basket with OptumRX?

Walgreens Accused of Overcharging Customers-Algorithms-Drug Stores Have to Pay Penalties on Their Issues, Why Does Wall Street Skate When Their Killer Algorithms Attack?

If you have watched the news of late, then you may have noticed that United/Optum RX has figured out there’s big money in distributing drugs and pharmacy benefit managers of course make money with so called kick backs from the drug companies and their distributors.  You may not always get the lowest price but rather the drug that pays the PBM the best.  Here’s where OptumRX is now in the workman’s comp pharmacy benefit management business with this acquisition of a couple months ago.  Pay attention folks as the bigger conglomerates keep getting bigger and bigger and the more say they have, the less say we have.

You can see here where OptumRX has already hurt some of the business in Florida with a big move to take some of their business.

By the way, look at how Express Scripts “scores” you with predictive behavior algorithms with 300 metrics that mostly have nothing to do with taking prescriptions.  They all do this and I just happend to cover the Express Scripts portion as they brag about it on their website for anyone to see.

Ingenix (United Healthcare) algorithms, so the scoring algorithms get intertwined all over the place for the sake of making money selling “scores” about all of us and with flawed data to boot.  The archived post on that one is below.

Now with Walgreens working to buy Rite-Aid, they too are using the EQIPP Platform to “score” and take in a bunch of data on predictions.  The only problem with this program is that it searches out all kinds of financial data to check on you to find a credit card, or some other transaction to see if you filled a prescription, when, and a lot more.  Below are a couple links that goes into detail on why you should pay cash for prescriptions if you want to preserve “some” of your privacy.

Are you starting to see a pattern here, maybe?  If you don’t better dig in a look again as this is all about making money distributing drugs and not so much on saving costs as it’s always billed.  Why else would Anthem be suing Express Scripts?  In addition you also have FICO doing medication prediction scoress, so easy they say to do with mining data about you is all they need is your name and address and they can score anyone on with what they also call medication adherence scores…la te dah…tons more data about you to sell along with these “scores”.

Also as a side note, be aware that your voice is being scored for your behavior at the insurance call centers, most of them have these algos to score you and yes these behavior scores get sold too!

So out of this deal with OptumRX, as a patient you get convenience of going to a Walgreens store and both Walgreens and OptumRX benefit on getting more data and scores to sell about you, and those scores are top secret, just try and ask a pharmacist for your medication prediction adherence score sometimes?  BD

Unlike CVS, Walgreens doesn’t operate its own drug-benefits business. The deal with OptumRx will probably draw more customers into Walgreens stores, along with boosting drug sales, according to Ann Hynes, an analyst at Mizuho Securities. Express Scripts probably has the most to lose during the employer-benefits selling season, which begins next month, according to Hynes. The company has a similar arrangement with Walgreens, but still tends to push customers to get their drugs by mail.

UnitedHealth’s partnership with Walgreens starts on Jan. 1. Some members with drug coverage from OptumRx may lose the option of filling their prescriptions at pharmacies other than Walgreens under the deal, though that’s up to the employer or other entity that’s making the benefits decision. The deal will also give Walgreens pharmacists more access to information that will help them counsel patients who are on multiple drugs, aren’t getting refills or taking pills that shouldn’t be taken together, said Mark Thierer, chief executive officer of OptumRx.