Home » Insurance » Medically Related » My Commentaries » Technology » OptumCare Doctors to Get Allscripts Medical Records EHR–Optum Continues to Buy More Practices and Manage More Doctors Through Independent Physician Associations, Many of Which They Own

OptumCare Doctors to Get Allscripts Medical Records EHR–Optum Continues to Buy More Practices and Manage More Doctors Through Independent Physician Associations, Many of Which They Own

I’m starting to see more doctors in Orange County selling out their practices to United Healthcare’s Optum subsidiary.  Sometimes when patients go for their next appointment, in addition to see their doctor’s name on the door, it also now says OptumCare.  So now it appears at minimum 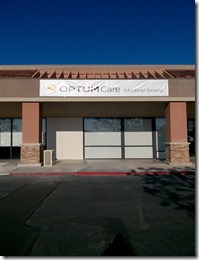 that doctors practices that are owned outright by Optum will get Allscripts medical records and perhaps the affiliated doctors working for the Physicians Associations they own, such as Monarch Healthcare as an example.  The article was not explicit to explain enough about how this will work exactly.  If you click on the picture at the right, I did a snap shot of a new OptumCare Clinic in Orange County that was just opening and this is where a doctor recently sold his practice to Optum and they provided him with a physician’s assistant in his office and are running the operation.  Here’s a couple examples of the IPA affiliations at the links below.

We all should probably know the squeeze is on the small practices to where the admistrative end of running a practice is under attack by the government with CMS and their new MACRA payment plan which is still up in the air as of this writing.  Practices of less than 24 doctors will pretty much be penalized and will not be able to sustain the cuts.  The new payment plan has no proof of concept and is just a model being put out there with a bunch of quantitated madness to again push more small practices out of business.  As an average, doctors who contract with United Healthcare get paid around 12% LESS THAN MEDICARE.

That will give you the idea of where all of this is headed.  In addition, the doctors who are affiliated via an IPA, Independent Physicians Association who are smaller practices no doubt will have to pay for the Allscripts EHR as wel.  I don’t know how it will work exactly for the “owned physicians” where Optum has bought them outright.

The Rise of the Quants, Again! This Time In US Healthcare- Taming the MACRA Beast of Quantitated Madness For A Lot of Things That Are Probably Just Not True

In addition, there’s a lot of other interesting items taking place with Optum and Urgent Care centers as they have opened up some of their own and they also bought Med-Express, who runs urgent care centers and is also soliciting doctors to sell their practices to their company.

Other insurers don’t have the “fox in the hen house” with the Feds either like United does and has for a number of years and here’s one more example.

this entire subsidiary of Optum, Optum Clinics Holdings as well as the money raised, huge bond sale to by the Catamaran pharmacy benefit management company, which also increased their business as Catamaran had a 10 year contract with Cigna so under the OptumRX subsidiary, United Healthcare picked up a ton of revenue there.  I don’t know much about anti-trust but enrolling with one insurer and having a pharmacy benefit manager from another insurer seems to be cutting down competition in the prescription arena.  You can read more about the Clinic Care side of this in Southern California and link to what’s going on in other states from here.  This link appears to be additional practices in Orange County that sold their practices to Optum.

Here’s what is being advertised to doctors…again probably at that 12% less than Medicare payment schedule.  Here’s a link to the “practice acquisition” page with one doctor talking about how he sold out.   I used to drive by that practice all the time on my way home a few years ago, and it’s not a new one.

So now with Allscripts Medical Records, there will be more access to your data from the big conglomerate, that’s for sure.  Optum used to sell their own EHR called Care Tracker and they sold it off about a year or so ago.  Optum has been advertising for a while that they also want to be your medical records integrator, for AllScrips and a few other big companies.

So if you are a patient, be aware that many small practices are being bought by United Heatlhcare, and there’s also a bunch being purchased by large hospital systems as well.  When I took the picture above, in a small strip mall you had the OptumCare office on one side and a new Tenet MedPost Urgent Care Clinic opening up a few doors down, again a small strip mall, large enough for both?  BD

Allscripts will integrate its EHR and practice management software with the technology OptumCare’s physicians currently use. The combined technology and single platform will facilitate the integration of patient’s care across the ambulatory continuum of care, the company said.