Nice and welcomed I am sure.  A few weeks ago Cape Cod was in the Desperate Hospitals section as they had recently 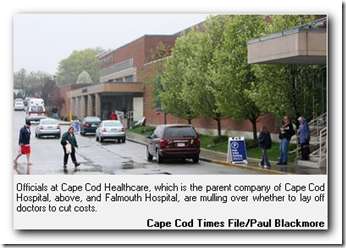 announced a $17.6 million revenue loss, and were about to lay off so-called hospitalists, doctors who treat patients whose primary care physicians don't do rounds at the hospitals.  BD

FALMOUTH - A Cape Cod couple has donated $10 million toward construction of a new oncology center at Falmouth Hospital, the largest gift ever made to Cape Cod Healthcare Inc. A spokesman for the hospital says the center will be named after donors James and Ruth Clark of Falmouth and Palm Beach, Fla. James Clark, a two-time cancer survivor, is a former trustee of the Falmouth Hospital Foundation and the retired CEO and chairman of Hornblower, Weeks, Hempill and Noyes, a privately held securities firm in New York.