IntriCon Corporation designs, develops, manufactures and distributes miniature and micro-miniature body-worn devices and is located in Minnesota and has offices in the US and outside of the US as well.  I looked at the website but could not determine where the actual manufacturing location is.  This may explain why today I had so many reads on hearing aid on the blog, the Esteem brand mainly.

IntriCon has several body monitors in their product line to include their cardiac monitoring tool that was approved by the FDA in August of this year.  The company is growing with subsidiaries who all have their own contracts as well, such as this division who introduces drugs/devices to the FDA and consults to help them get approved.

Again, I don’t know where the products are actually made but wonder if this is part of the action taking place with their China Gate acquisition of a couple years ago that already had a line of communication open with the FDA and seeks to get more Chinese drugs and products distributed in the US and worldwide? Many devices companies manufacture over seas and in China but don’t have a US health insurance company to lobby and help with other processes of getting a product to market.

They are offering an online hearing test which may or may not be the best thing but it’s there.  For United customers with Medicare Managed care and drug plans there will be no out of pocket expense and of course when taking a hearing test on line all that is documented and stored so the company can store it and use to tune the

device.  HiHealthInnovations is a newly formed subsidiary.  If you are not under their plan the device cost will have a co-pay of $649.  This is interesting as I wonder how this works with other insurers as well because every time one is sold outside of the United clients they make money.  They make money all the way around with being a supplier on who ever gets one, plus they have full control of their reimbursement.

They also plan to sell the cheap hearing aide in retail stores but are not set up as of yet and of course the computer test is free for doctors at no charge but Walgreens, WalMart and other majors were mentioned.  I wonder if it’s going to work anything like the pay for performance efforts with pharmacists getting any additional funds for pushing the product when it does arrive.

VCs is tight right now.  This looks like one more subsidiary in their entire business model to now be able to distribute the devices, so are drugs next in this new subsidiary or is there a new one waiting to be added?

Everywhere you turn today, whether it’s billing, now devices, imaging, reimbursement, banks they are in to just about any are of healthcare you can think of and again is this the future for small medical devices and biotech companies to be consumed by insurers?  It’s starting to kind of look that way.  With all the physician’s groups they are buying, will the doctors have other options for other hearing aids to be provided to patients since this one will be the cheapest?  It does make you wonder if this will push others out.  Last month they bought a huge section of HMO managed patients in Orange County along with Memorial IPA in Long Beach, CA.

Also in the OC, some hospitals won’t take United Employer insurance either and there may be other repercussions in other states as such.  There’s also their legal case still ongoing to where Untied is suing the government wanting the Tri-Care contract for the southern part of the US, so they have some type of activity going on all over.  Anyone on Wall Street need a hearing aide, here’s your model:)  BD

Monday, a new UnitedHealth business launched four different kinds of hearing aids, made by supplier IntriCon Corp. (IIN), with a goal of helping reach millions of people who don't get the devices due to high costs and lack of insurance coverage.

The move comes as insurers kick off marketing efforts for their 2012 Medicare-based plans. UnitedHealth is offering new hearing-aid benefits in such plans, but also is selling devices on a retail basis over the Internet, injecting it into a multi-billion-dollar market where major players include European companies Sonova Holding AG (SOON.VX), Siemens AG (SI, SIE.XE) and William Demant (WDH.KO).

UnitedHealth is using its scale--with the entire company projecting $101 billion in sales this year--plus a proprietary Web-based hearing test to offer an alternative to a supply chain it says can lead to devices that are too expensive for many people. The move drew criticism from a professional group of hearing experts, which said online hearing tests can't replace face-to-face exams. 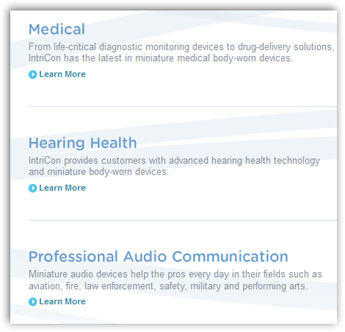 UnitedHealth, based in Minnetonka, Minn., has been expanding its business far beyond the bounds of health insurance. It has a broad array of health-services offerings, including its pharmacy-management business, and it has acquired physician groups. The latest venture marks UnitedHealth's first foray into medical-device sales, and the company believes it is the first in the industry to make such a move.

UnitedHealth is keeping costs low by simplifying the route for patients to get hearing tests and, if necessary, hearing aids. It has an online test designed to work with earphones and is planning a mobile application for smart phones and tablet computers. Based on the results, hi HealthInnovations will custom program hearing devices.