Just Approved by FDA, The Watchman Implanted In Two Patients in Southern California, Will Make Life Normal For Many…

I think I have been writing here and there about the Watchman progress since I started 8 years ago and last week it was finally approved.  This device can help with less need for blood thinners with patients who are at risk with their use.  Here’s one from the archives below. 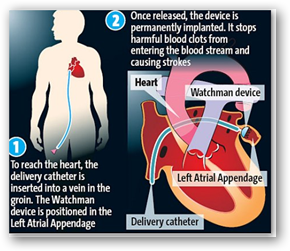 Atrial Fibrillation – What will be the future standard of care, Warfarin or the Watchman Device?

The one surgeon had already implanted several Watchman devices during the clinical trials so it was a natural for him to do the next surgical procedure.  BD

Surgeons at two Southern California hospitals on Monday implanted a controversial heart device that struggled for years to gain the approval of the U.S. Food and Drug Administration.

The Watchman device, made by Boston Scientific Corp. and designed to reduce the risk of stroke for people with irregular heartbeats, was approved March 13 by the FDA after years of trials, rejections and debate. An FDA advisory panel in October voted 6 to 5 that the device's benefits outweighed its risks.

For decades, most people with atrial fibrillation — an abnormal heartbeat — have been treated with blood thinners, which decrease clots in the heart.

But blood thinners can create complications, such as internal bleeding. Cardiologists have said ideal candidates for the Watchman would be people for whom blood-thinning drugs were considered risky or not effective.

Mary Thomsen, a 77-year-old resident of Westwood, has waited months for the Watchman after blood-thinning medicine caused internal bleeding.

"I'm happy to do it," Thomsen said shortly before the surgery at St. John's. "It's a very important procedure. It's going to make life normal for a lot of people."