A few months back I found this article about Homeland Security doing the same thing with testing it out on reading the minds of passers by in a shopping mall.  They already have it.  Now it looks like it’s going to the next level to where we won’t have to actually talk to each other at some point and want to take this up to a two way brain read, although it is slated for military use. 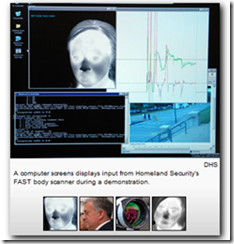 “So, can you see this showing up at hospitals some day?  Scary thought overall.  It was tested in the DC area on just regular “Joes” who had no idea it was there.

You know on second thought we could have used this on Wall Street recently, you think and with a little re-programming and different settings, why not have one in the White House and in Congress?  (grin)  We all want to know what they are thinking.”

When it becomes a reality, I wonder how this will function with “meaningful use”?  Will your PHR of the future be half loaded in your brain?  BD

We're no strangers to crazy DARPA projects around here, but this one especially strikes our fantastic fancy. The agency's researchers are currently undertaking a project -- called Silent Talk -- to "allow user-to-user communication on the battlefield without the use of vocalized speech through analysis of neural signals." That's right: they're talking about telepathy. Using an EEG to read brain waves, DARPA is going to attempt to analyze "pre-speech" thoughts, then transmit them to another person. They first plan to map people's EEG patterns to his / her individual words, then see if those patterns are common to all people. If they are, then the team will move on to developing a way to transmitting those patterns to another person.