First Case of Pigs with Swine Flu Reported in Canada

Just as most of the cases being reported, the pigs were exposed to a worker who had returned from Mexico, so the Swine are getting Swine flu too.  If you have the flu, stay away from the pigs too.  The numbers sound pretty large too, with over 200 pigs being infected.  Like us, some get the flu 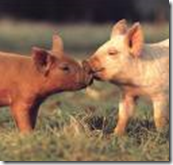 worse than others.  As the article states, there’s no mutation, they are getting what we are and so far, none have died.  It is pretty unlikely that the flu can be passed from the pigs it states, and eating pork still is safe and does not pass the flu on.

All the pigs have been quarantined and so far, this has all taken place on one farm only.  If you are unfortunate enough to catch the flu, stay at home until you have recovered and stay away from the pigs too.  BD

OTTAWA – Pigs on a Canadian farm have been infected with the new swine flu virus — apparently by a farm worker back from Mexico — and are under quarantine, officials said Saturday. It is the first known case of pigs having the virus.

The officials said the pigs in the province of Alberta were thought to be infected by a Canadian farm worker who recently visited Mexico and got sick after returning to Canada.

The pigs in Alberta were thought to be infected by a farm worker who returned from Mexico on April 12 and began working on the farm two days later. Officials noticed the pigs had flu-like symptoms April 24, Evans said.

Approximately 10 percent of the 2,200 pigs on the farm have been infected, Evans said.  The new virus has shown no signs of mutation when passing from human to pig, Evans said.

Swine Flu: Dr. Oz Speaks Out and Gives Some Advice and Information