This is yet another hand washing technology solution using RFID from a company called Proventix.  When the staff member enters the room they need to wash their hand and upon exiting the room the machine anticipates another washing before leaving the patient room.

Last year I wrote about another system called Hygreen that does the same thing and you can read more about their system at the links below.  The hospital using the Proventix system is located in Alabama.

The article talks about how they have set the software preferences as an incentive and not a “watch dog” during the pilot phase to see how this works as the entire idea is not to punish but rather to use in a positive fashion.  Now when you continue down further reading here there are plans in the making to put his software and system on steroids, by making better use of the screen such as displaying patient vitals and perhaps recent lab results, visible while washing hands!

What is real interesting too is the customization of the messages viewed, catch the one with the latest sports news too in the images below, that one should be real popular, obviously 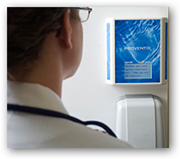 maybe seen after any other vital messages have been shown.  nGage is the name of the software that does the reporting work for the data.

“nGage includes an electronic monitoring record in the background that works as a health maintenance system. It can look at and respond with two types of information: predictive and preventative. Predictive information is time-based, giving details related to the specific disease state of the patient. Preventative information is event-based. Because the nGage system is integrated with the healthcare facility’s information system, vital signs that are entered into the facility’s system are recognized and communicated to the screen at the hand hygiene station. CDC guidelines say that a healthcare worker will engage in a hand hygiene event before patient contact. At that compliance event, information critical to the patient’s care can override any other communication. It can include data such as the patient’s vital signs and how those signs are different from their norm.”

The video below shows how it works and also at the end there’s some added J and J recall information that just happened to be on the same newscast it appears.

Thus far 42 patient beds are connected as well as the nurses stations for a total of 80 RFID stations.  Each staff member wears their own name tag that contains an RFID chip for identification.  These appear to be all hard wired with Ethernet but who knows if wireless could be next.  BD

June 10, 2010—Princeton Baptist Medical Center, in Birmingham, Al., reports that it has seen a 36 percent reduction in patient visit time resulting from a health-care acquired infection (HCAI) since it began employing an RFID-based hand-washing compliance system in February 2010. That equates to 125 fewer bed days since February in which patients were hospitalized for infections gained while receiving treatment at the facility. The system, known as nGage, was provided by Proventix, with Synapse Technologies providing and installing customized readers and tags that operate at 2.4 GHz and utilize the IEEE 802.15.4 (ZigBee) specification.

This was almost a no-brainer," says Paula Davenport, Princeton Baptist Medical Center's director of surgical services. "As we all know, hand washing is one of the primary ways to prevent the spread of infections." Since the system was installed, she notes, "We definitely have seen an improvement in infection rates."

During the past few years, other hand-hygiene systems using RFID have been developed and commercially introduced (see RFID Debuts as Hand-Washing Compliance Officer and Patient-Safety Center Tests RFID-enabled Hand Sanitizers). Some issue alerts by pager or phone, and some produce an audible announcement to notify a health-care worker who has failed to wash his or her hands. Princeton Baptist wanted a system, however, that would be easy and enjoyable to use, rather than something that would have a punitive effect on its staff (such as embarrassing them with audible alerts). Although the Proventix system can send alerts to pagers or phones, Davenport says, the hospital wanted only to encourage workers to wash their hands, not issue an 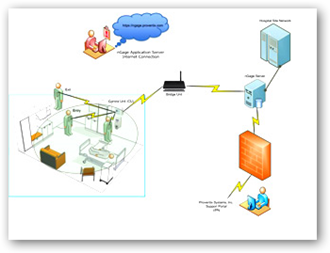 alert when they failed to do so.

Although the medical center is initially displaying only generic information regarding the value of hand washing and its impact on diseases such as the flu, in the future, Proventix software will cause the screen to display personalized information for the dispenser user, as well as providing health-care information about the patient who may be in the room in which that dispenser is located. (For example: "Alert: Patient is a fall risk.") If a user is a physician with an interest in updates specific to certain medical regulations, for instance, that is what he or she will see on the display. What's more, CNN headlines or sports results could be provided as well, if so requested.

Upon approaching the hand-washing station, he or she must press the dispenser lever to use the sanitizer or soap and water. At the same time, the software links the ID number of the individual standing in front of the station with the dispenser's activation. The software then displays messages specific to that user (currently, all Princeton Baptist employees receive the same message, describing the importance of hand washing on reducing infections, and providing statistics to reinforce that message), and also stores a record of the event, indicating when and where the employee has washed his or her hands.