New York is now investigating if the company sold policies without the assets to cover, sound somewhat like short selling without the funds to back

it doesn’t it?  The hedge funds are looking at CAPCO for information and probably some money too when it comes to settling the Lehman bankruptcy, and the company has never had a claim, until now.  Interesting too how the company moved from New York to Vermont to get out of the spotlight and scrutiny of the state of New York.

What is starting to worry individuals too is that when you call, according to the New York times, you get a recording that you have reached a non working number at Morgan Stanley, so who and what is running the place?  It’s credit rating was reduced to junk in December and no longer exists.

There are pension funds, endowments and medical funds all tied in here, so what happens if CAPCO files bankruptcy, another “Madoff” saga that continues?   From the website, here’s the listing they provide of their accounts with some very familiar names. 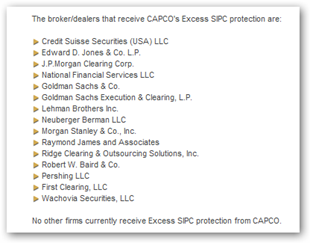 In a similar reinsurance news story, AIG is back in the news:

“Nothing is wrong with spreading risks to other companies, a practice known as reinsurance, when it is carried out with unrelated, solvent companies. It can also be acceptable in small amounts between related companies. But A.I.G.’s companies have reinsured each other to such a large extent, experts say, that now billions of dollars worth of risks may have ended up at related companies that lack the means to cover them.

Mr. Gober is a consultant for a lawsuit on behalf of A.I.G. policyholders, filed in California Superior Court in Los Angeles. The lawsuit seeks a court order requiring all A.I.G. subsidiaries doing business in California to put enough money to cover their obligations into a secure account controlled by the state treasurer.”

The hunt is on to determine if assets are really there and available from several angles it appears and the age of transparency is bringing many things to light today, some expected and maybe some not expected.  BD

Next to a Chinese restaurant in Burlington, Vt., lurks a quiet guardian of Wall Street — an obscure insurance company that is supposed to protect big-money investors in the event of a catastrophic failure of a major brokerage firm.

A failure, for instance, like the one that brought down Lehman Brothers nearly 11 months ago. Now, after years in the shadows, the insurer, the Customer Asset Protection Company, could finally be put to the test, and questions are starting to swirl.

The worry is that the company, which has never paid out a claim, might be unable to cope with the Lehman bankruptcy.

By some industry estimates reviewed by the insurance department, Capco could face nearly $11 billion in claims but has only about $150 million with which to meet them.

The Insurer Capco, a Pillar of Lehman, Begins to Look Flimsy - NYTimes.com