The disease of essential tremor is known to be genetic, but that’s not 100% either.  Recently the EITF received a grant to further the research into finding a cure.  The Mayo Clinic also has quite a bit of information available at their website as well.  As with Parkinson's, deep brain stimulation is also an option in addition to drug treatment.  BD

“Essential tremor is a neurological movement disorder commonly referred to as ET that affects more than 10 million people in the United States alone and is often misdiagnosed as Parkinson’s disease.  It is characterized by rhythmic, involuntary and uncontrollable shaking of the hands and arms during voluntary movement; it sometimes can also affect the head, voice, legs and trunk. ET shows genetic tendencies. Children who have a parent with ET have approximately a 50 percent chance of also showing signs of the disorder in their lifetime. However, it is not a strictly genetic condition, as it also presents itself in individuals with no family history of ET. 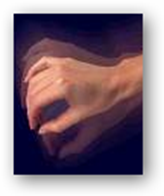 There currently are no medications specifically designed to treat ET. Primidone, an anti-seizure medication, and propranolol, a beta-blocker, are the two most commonly prescribed drugs, but they alleviate symptoms in approximately 60 percent of patients. Tremor can lead to difficulty and even disability in performing activities of daily living. While not life threatening, ET is a very serious and progressive condition that can significantly affect a sufferer’s quality of life – socially, professionally and emotionally.”

LENEXA, Kan. – July 2009 – The International Essential Tremor Foundation (IETF) today presented $75,000 in research grants toward two promising studies meant to help pinpoint the mechanism of action in essential tremor (ET) – the most common neurological tremor disorder that affects more than 10 million people in the United States alone. Both studies will look further into GABA receptors – areas in the brain that have been found to affect brain signals. Because GABA mechanisms are thought to be of significant importance in ET pathogenesis and therapy, these two grants will assist in heightening knowledge surrounding the condition.

A $50,000 research grant was presented to Dr. Adrian Handforth, MD, Department of Neurology, Veterans Affairs Greater Los Angeles, for the study “Identification of the Anti-Tremor Target of Low-Dose Alcohol.” Funds for this grant were raised through The Goulden Touch Foundation – an organization founded by Chicago Bears placekicker, Robbie Gould, and dedicated to raising funds to support IETF efforts.

Many persons with ET report that alcohol – even as little as one drink – can be effective in suppressing tremor. Because alcohol has many actions on the brain, doctors find it difficult to pin-point which action is directly connected to tremor suppression. Researchers do know that alcohol activates various GABA receptors (GABA is a modified amino acid that serve as neurotransmitters), known to inhibit signals between brain cells, thus possibly acting this way to reduce tremor. Through his research, Dr. Handforth hopes to identify which receptor type alcohol acts on to suppress tremor, which in turn could be used to design medications that work on these receptors only.

“Scientists at the University of California at Los Angeles recently found that these GABA receptors are very sensitive to alcohol levels,” says Dr. Handforth. “Based on that observation, I predict that it is through these long-acting GABA receptors that alcohol suppresses tremor. Such a conclusion would prove beneficial for ET sufferers in that it would give hope to those that are not responding to current medications.”

Dr. Frederic Calon, Centre de recherché du CHUL, Quebec, Canada, received a $25,000 research grant for the study “GABAergic Abnormalities in the Deep Cerebellar Nuclei of Essential Tremor Patients: Postmortem Investigations.” Treatments for conditions like Parkinson's and Alzheimer's disease stemmed from changes discovered in the brains of patients who suffered from these diseases. The goal of Dr. Calon’s study is to utilize this research template for ET. Current data suggests that an alteration of the neurotransmitter GABA may be a clue in identifying new treatments for the condition. The ultimate goal of both Dr. Handforth and Dr. Calon’s studies is to develop new drugs that can correct these anomalies. Preliminary results for both projects are expected in December 2009.

“Basic research – such as these two studies – which is currently under-funded, is what will inevitably lead to identifying a cause for ET,” says Cathy Rice, Executive Director of the International Essential Tremor Foundation. “Knowing where this disease comes from will in turn lead to developing treatments designed specifically for this condition that affects so many people worldwide. The importance of this research cannot be understated, which is why the IETF works diligently to fund the most promising studies around essential tremor.”

About The International Essential Tremor Foundation

Headquartered in Lenexa, Kansas and founded in 1988, the International Essential Tremor Foundation is the leading organization in the world dedicated to helping those affected by essential tremor through awareness, education, support and funding research to identify effective treatments and hopefully, someday, a cure for the condition.

The IETF hosts ongoing community awareness events across the country to build a better understanding of ET, and provides those affected with the basic knowledge necessary to become their own advocate when seeking treatment. The Foundation provides support and resources to seven community ambassadors and the nationwide network of 80 local support groups.

Since its inception, the IETF has distributed more than half a million dollars in research grants to fund 12 promising research studies to search for the cause of ET. To learn more about essential tremor, visit the IETF website at www.essentialtremor.org.

About The Goulden Touch Foundation

The Goulden Touch Foundation is a non-profit organization, established in 2008 by Chicago Bears placekicker Robbie Gould. It is dedicated to supporting research funding and providing financial support to the more than 10 million Americans and families affected by essential tremor. In its first year, The Goulden Touch Foundation made an initial donation of $61,000 to the IETF to fund research and support initiatives benefitting ET. For more information, visit www.thegouldentouch.org.