Sen. Charles Grassley, R-Iowa has already received the articles in question, and I wonder how long he has had them or if time has permitted reviewing the documents, well at any rate it appears they will be reviewed now.

Not too long ago I interviewed Dr. Erika Schwartz about bio identical hormone treatments and her big question too was “where are the studies” when it came around to comparing Wyeth’s product to those are bio identical and not made from horse urine.  This adds a bit of fuel to that fire as well as bio identical are like those found in our systems naturally. 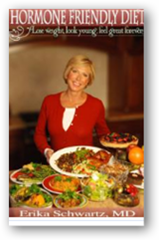 The interview is packed full of information and well worth reading.  You can visit her website as well for additional information:  www.drerika.com.

“Premarin she said has been the leading estrogen product for years, and is made from the urine of pregnant mares which is bio-identical if you happen to be a horse.  Horse estrogen is foreign to our bodies, where as a molecular derivative created that is like what is naturally found in our bodies would have a better outcome.  Our body has to figure out what to do with Premarin and how to metabolize the estrogen from horse since we are human.  (Note: Due to some lagging sales, Wyeth has also recently increased the price of Premarin.)”

Perhaps now that some of the journal information and other writings are coming to the surface in the age of transparency, maybe somewhere along the line we can get some information and studies on the bio identical hormones.  There are several FDA-approved drugs that are bio identical to include Estrace, Evamist, Vagifem, Estraderm, and Climara for estrogen and Prochieve, Prometrium, and Crinone for progesterone and I myself would like to see how they line up with Premarin and the potential of breast cancer as we don’t have any official studies on record comparing bio identical and the Wyeth drugs.

LITTLE ROCK, Ark. (AP) — A federal judge has ordered the unsealing of thousands of pages of documents pertaining to the ghostwriting practices of Wyeth Pharmaceuticals, which is being sued over hormone replacement drugs.

U.S. District Judge Bill Wilson ordered the papers unsealed Friday at the request of a medical journal and The New York Times. Plaintiffs attorneys presented the papers earlier at trial to show Wyeth routinely hired medical-writing firms to ghostwrite articles that appeared in seemingly objective medical journals but included only the name of a scientific researcher as the author.

The ruling came in a case that involves about 8,000 lawsuits that have been combined before Wilson. The lawsuits focus on whether Wyeth hormone therapy drugs Prempro and Premarin, used to treat symptoms of menopause, have caused breast cancer in some women.

Plaintiffs say ghostwriting is when a drug company conjures up the concept for an article that will counteract criticism of a drug or embellish its benefits, hires a professional writing company to draft a manuscript conveying the company's message, retains a physician to sign off as the author and finds a publisher to unwittingly publish the work. Drug companies disseminate their ghostwritten articles to their sales representatives, who present the articles to physicians as independent proof that the companies' drugs are safe and effective.