In California, we have had many tales of balance due billings and Prime Healthcare was one of the companies at the heart of the matter, although 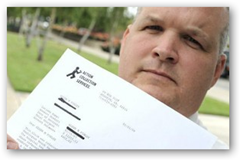 they are not alone by any means.  Prime does not have contracts with insurance carriers and bills the customary fees to the carriers, in this particular case it was Kaiser for the out of network services.  BD

Last year, David and Vicki Fowlkes were stunned to receive a letter from West Anaheim Medical Center saying they owed $50,739.70 and would be turned over to a collection agency if they didn’t pay. They were insured by Kaiser Permanente and their coverage plan required them to pay only  a $250 deductible for Vicki’s six-day hospital stay.

The state has since banned the practice and filed a suit of its own against Prime. Prime, which is based in Victorville, had already sued Kaiser, claiming the health plan did not pay fair rates when its members were hospitalized.