Windows Mobile has been getting a bit of flack lately, so why not add some inside humor to the scenario.  The rejected apps are funny.  BD 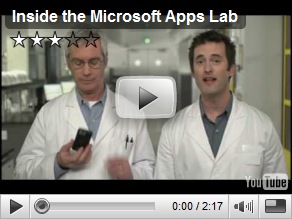 Today, Microsoft’s Windows Mobile Dev team released a humorous video giving a sneak peek inside the Microsoft Apps Lab. Here, you get a behind-the-scenes look at a few of the apps Microsoft dreamed up for its new Windows Marketplace, but were forced to reject for various reasons ranging from stupidity to lawsuits to physical pain.