It looks like the doctor, Gary Michelson was right, 10 million was nowhere near enough and well, just look at where we are today with Congress.  Do you think anyone in Congress wants to be a millionaire, no wait a minute, most of them already are.

We do know that Wellpoint is passing along a big increase and maybe that will continue to fund the effort here. 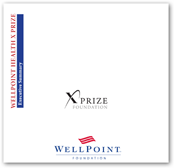 This was one of those gesture that flat out has gone nowhere, but at the time made for a little positive PR to say the most.

X PRIZE Foundation for HealthCare – Is the Incentive High Enough

Reforming health care is one huge project and I wonder if 10 million is enough for folks to really get involved.  The day after the announcement we had this incentive announced by a retired physician in Los Angeles, a more focused target and worth 65 million to find a way to non surgically sterilize cats and dogs.  His quote below, as he felt 10 million was not enough for anyone to really get involved with the cats and dogs.

“No one will stop what they're doing and turn their attention to this problem for $10 million. That's not enough," says Michelson, 59, a retired Los Angeles orthopedic surgeon who invented and patented hundreds of surgical instruments, won an infringement case in 2005 and landed at No. 317 on Forbes' 400 Richest Americans list last month.”

Last month there was a press release out on the symposium being held in Dallas in April, so he’s serious about the 65 million he pledged.

populations worldwide. The conference will feature nearly 40 speakers and will bring together scientists, veterinarians, animal welfare and public health professionals, pharmaceutical industry representatives, and funders from the U.S. and abroad. The goals of the event include expediting the progress of scientists, raising awareness among animal welfare advocates, and networking for key stakeholders in the industry.

At the symposium, Found Animals will provide an overview of the Michelson Prize & Grants. Created by entrepreneur and billionaire Dr. Gary Michelson, and administered by Found Animals, the Michelson Prize & Grants in Reproductive Biology will award a $25 million prize to the first entity to provide the Foundation with a safe, effective, and practical non-surgical sterilant for use in cats and dogs, as well as up to $50 million in grant funding for promising research in the pursuit of this goal. Found Animals is hopeful that this large monetary incentive will motivate scientists, including those who may never have been aware of the issues of pet overpopulation, to bring cutting edge scientific approaches to bear in this historically underserved area.”