Pella-DRX is the name of the product once it has been recycled which is a pellet.  That needle used today to give your injection may end up being part of a building wall in the future.

Disposal by mail makes it convenient to send to the facility.

They also manage medical waste such as unused vaccines too.  The H1N1 and Tamiflu are slated as a couple examples of what they can handle.

For big jobs there’s the 18 gallon container and just think of how much less will go to landfills.  If you are a consumer needing to dispose of needles they have you covered there too.

useful resource. This first-of-its-kind Waste Conversion Process™ ("WCP") transforms discarded needles, syringes, lancets and other medical waste into a new product called PELLA-DRX™ – which is used in the manufacture of many types of resources including cement, vital to everything from homes to highways to high-rise buildings. This process renders the origin of the product indistinguishable and removes all hazards from the medical waste. WCP eliminates Sharps' landfill use by 100%.
For the first time, medical waste is converted into a safe and useful material as sterile as sterile surgical instruments. PELLA-DRX™ and the Waste Conversion process renders materials once considered waste, a new and useful life.”

Just last week I posted on pharmacies that can help you get rid of your unwanted drugs and Sharps is part of that program as well.

The big amazing part here though to me is the pellets that the company makes and where they get used, like in cement. I guess if China can make bricks out of melamine, what’s to say this is not a good solution.  Remember melamine was the ingredient that was added to milk to give a false sense of nutritional value last year.   They may have melamine pellets over there.

Here’s the video that explains more of the process, and again if this patent pending process keeps stuff out of landfills and removes pathogens at the same time, we might have a real winner.  BD 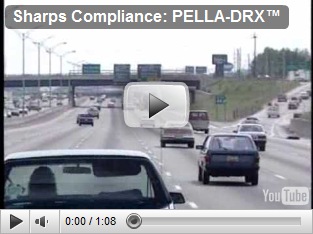 Back in the 70’s, Mad Magazine ran a satirical article proposing crazy new methods of dealing with garbage. One of them involved taking the trash, compressing it into cubes, then building things out of those. Flash forward to 2010, and a Houston company is doing almost that very thing, and with medical waste, no less. Sharps Compliance takes items like needles, syringes and lancets, and presses them into a pelletized building material called PELLA-DRX.

To make the product, the waste is first sent through an autoclave, which kills any pathogens. Next, it goes through a shredder, which reduces its volume by over 90%. Finally, it gets compressed into pellets, which bear no visual clues as to their origins.

Medical waste no longer being wasted