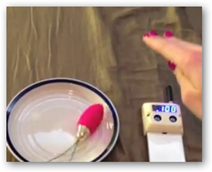 was used to create the container to hold the wireless device.  Be sure you have your wireless network encrypted so this doesn’t get out on the network with an exposed IP address though:)  You can watch the video and see how the devices moves around a plate and see the enclosure built. Sure this concept leaves all kinds of ideas open for controlling a medical device of some sort and that’s why it’s here at the Quack to show some innovation.  When you think of it though it’s not anything more outrageous than the FDA approved male vibrator that is on the market that you need a prescription for.  Wonder if this one will take that route, don’t think so:)  If you want to see all the details you can visit her website where she takes you through each component and how they all fit together and it’s very detailed and technical.  BD

Most hacks are done in the name of hacking with the end result rarely being put to good use, if ever leading to an orgasm. With a simple declaration, one woman took matters into her own hands by removing them from the equation. Her goal: create a hands-free vibrator. The two black circles are ultrasonic transducers. One of them transmits short “chirps” at a frequency too high for humans to hear. The other listens for echoes. The 4-digit display gives another satisfying bit of feedback, in visceral high-contrast blue LED light. The external antenna gives it quite a bit more radio range than the original remote, and the exposed serial port on the left makes it easy to reprogram the remote using the Arduino IDE. http://news.discovery.com/tech/hack-vibrator-121129.html#mkcpgn=rssnws1

Thursday, November 29, 2012
Medically Related , My Commentaries , Other Items of Interest