There has to be a way to keep shareholder interesting rolling right?  What makes this story interesting is the fact that other insurers are already covering the device and United, who preaches preventional  medicine doesn’t seem to be in line 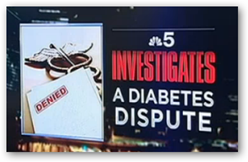 with what most of what they write today?  You can read the article below on how algorithmic decisions on expenses are weighing heavily on what decisions they make.  What makes this device unique is the fact that it monitors dropping sugar levels and that’s a big deal for those with diabetes too.  As I commented below, is this move one for keeping more money available for stock buy backs?

The video here discusses how the device costs $10,000 for the patient to buy on her own.  Ok that is the “stock” price and we all know that insurers via purchasing associations and hospitals do not pay that price, so overlook that in the video if you will as far as  being what the insurer, United  would pay.   Look at this from last year in New York, United has no problem kicking out a huge check for a $175,000 hammer to procedures that normally runs between $10-20k as an average. 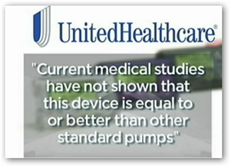 interesting for sure as the corporate lawyer in their defense seems to be totally unaware that United sells and markets anti fraud software and has for years, so even their own lawyers don’t understand the armies of subsidiary companies that United runs.

Again I look at the entire company as a whole and look at what each subsidiary does and United has a big stock buy back program going on as well as a dividend offering to shareholders so don’t let this side of the business decisions pass you up as it does have impact.  Al the major insurers are listed on the  S and P 500 and recently Bloomberg came out with an article that said 95% of the profits made by S and P 500 companies were going back into stock buy backs…so you put the two together here ok?  Don’t’ be naïve on some of the decision making as there’s 2 sides to every story.

So as it goes different insurers can make different decisions, so according to this story, United has not deemed this device to be a covered device and perhaps a purchasing organization will come in to play here as again we know insurers do not pay “stock prices”.  BD

A suburban mother living with Type 1 Diabetes said she is being denied a potentially life-saving medical device by her insurance provider.

Amy Carbone of Palos Heights said she also has hypoglycemia unawareness, a complication of diabetes in which the patient is unaware of a deep drop in blood sugar levels. She said her condition makes her more susceptible to losing consciousness.

That’s why Carbone’s nurse practitioner prescribed her a new device called the Medtronic MiniMed 530G with Enlite. It includes an insulin pump and a continuous glucose monitoring system. The device shuts off when blood sugar gets low.

“I’ve got other patients who are on this device who said it’s a God-send because without it they would have no idea that their sugars were dropping,” said Terese Bertucci, APN.

Carbone’s insurance provider, United HealthCare, will not cover the device for her. The company sent a denial letter to Carbone which read the services “are not eligible for coverage because your plan does not cover unproven procedures.” The letter also stated “current medical studies have not shown that this device is equal to or better than other standard pumps” for Carbone’s condition.

The FDA-approved MiniMed 530G with Enlite is listed online at a cost of more than $10,000. The device also requires constant supplies. But other insurance companies, including Aetna, Cigna, Humana and Blue Cross/Blue Shield, told NBC 5 Investigates they would cover the device for members who meet their criteria.