You may or may not have read about the morcellator issues with the potential to spread cancer cells, but it’s been out there and all non vaginal hysterectomies don’t require the use of that tool; however it gave United Healthcare the fuel they needed to cut costs and require approval for non vaginal procedures.  The problem stated in the story here is that there’s not enough doctors that know how to do the non vaginal procedures, so here we go with procedure needing to be approved ahead of time and the MDs having to submit data to substantiate such.

So once again the insurer, United says they know better than the doctors it appears.   Sure if a vaginal procedure is available and is recommended by a doctor, it’s one less item to heal but again you need the doctors trained to do so.  Sometimes a vaginal procedure may not work depending on other things going on with a woman’s health too.

So here we go, as they seized the opportunity to take over the decision making for the doctors and again using the morcellator as the vehicle to drive this.  United is pretty well known for driving down pay for MDs and in the OC where I am, many of them tell me the net payments from the company end up being less than what Medicare pays.  Maybe they are counting on the money saved here to help finance more stock buy backs too?  United has a  big one and also has to finance dividends for shareholders too.

On a related note, Johns Hopkins is taking United to court as they narrowed them out of 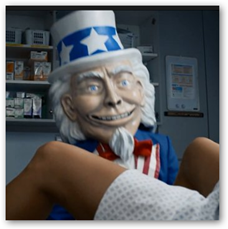 the network for some of their insured, mostly those who buy a policy from an insurance exchange, where United pays the doctors somewhere between Medicaid and Medicare rates.

Johns Hopkins -Insurance Plans From UnitedHealthcare Bought Via Exchanges Will Not Be Able to Use Johns Hopkins Physicians or Medical System–Filed Lawsuit To Sue United, Stating Violation of 1997 Contract

When the procedures is all done, we have this United/Dignity company that’s going around looking for contracts with hospitals to take over all the revenue cycling too, which involves firing current employees (maybe hiring some back) of a hospital to do all the billing and revenue cycle work.  If they get contracts with hospitals, even outside of the Dignity chain they are doing now (Dignity is their 49% partner), they can wipe the slate clean on billing and analyzing each procedure done. There should be a law against “too big to fail insurers”, you think?

You can even find United aka Optum over here at SAS..selling their analytics goods too.  BD

The nation’s largest health insurer is imposing tighter controls on its coverage for hysterectomies after more than a year of debate over a medical device that was found to spread hidden cancer in some women undergoing the procedure.

As of April, UnitedHealth Group Inc. will require doctors to obtain authorization from the insurer before performing most types of hysterectomies, according to a bulletin sent to physicians and hospitals.

Only vaginal hysterectomies performed on an outpatient basis won’t require prior approval. The method, in which the uterus is removed through the vagina, has long been considered both the least invasive and cheapest option yet is used in only about 15% to 20% of cases, according to federal data and studies. The technique hasn’t been emphasized enough in medical training, many doctors say.

Still, prior authorization had been uncommon for hysterectomies. Among the major commercial insurers, only Anthem Inc. requires them. A spokeswoman said the company started the practice last year over concerns that doctors weren’t fully considering alternatives to hysterectomies to treat fibroids.

Cigna Corp. and Aetna Inc. said they don’t require the extra step. “We believe this is best left up to the physician and patient based on clinical circumstances,” an Aetna spokeswoman said.