We have a somewhat new breed of hackers out there today.  I'm sure by now you have read one of the many articles about what was taken, but pretty much it was demographics on the insured or prior insured.  80 million files is a lot of data.  Today's hackers want to make money selling data too.  If there was a cause or someone felt they had been wronged someway, we probably would have seen something posted on Pirate’s Bay or some other site as such.  If that were the case the hackers would have stopped at a much smaller number of accounts.  Now we have everyone moving in to take a look, HHS is going to do their investigation and so are several states and a national insurers group as well.  We can’t leave out the lawyers here too as the firm of Hagens Berman is in there for their investigation too.

Listen to what data sells for on the black market, then change pace and see what it sells for in volume in the legal market…there you go why the crooks will reformat and want to get into selling stolen data to companies without them knowing it was stolen.

You might think that's an odd statement to make but it's true.   With 80 million files, that's a lot of data to repackage and sell.  Repackaging is when a data base is sold from company A to company B who may just happen

to have data base C sitting around so they query and merge the two together and now you have a brand new repackaged data base.  But let's say there were errors and flaws in either or both, well those move right along with it.

There's no record of who's merging and selling data today and it's a business in the US that is worth $180 billion a year, so see why the hackers want data?  They may sit on it for months and do nothing until things cool off.

The big thing right now though is the connection with SSNs and IRS as they don't match up names and SSNs...as a matter of fact 40% of fake tax returns sail right on through and pay off.  Those who were breached will face this every year for gosh knows how long.  If you missed the news of late, due to tons of fraudulent returns filed, TuboTax has put all refunds on hold temporarily.

See the video from 60 Minutes on the Tax Hole

For three years now I have had a campaign going to index and license all who sell data.  Why?  Well for one, who are they..here's a company (link below) you have never heard of that buys our credit card data, scores and analyzes the data and sells it to banks and insurers as well as our own consumer financial protection bureau, so what's up with that one?  Ever hear of Argus?  Read the link below and see how they score and analyze your data and sell it to insurers, banks and even the good old US Consumer Financial Protection Bureau.  That last one is nuts as 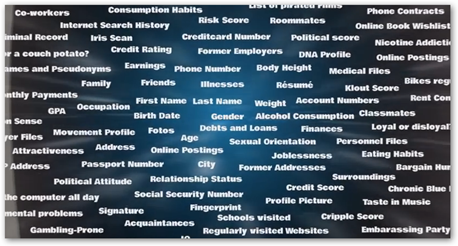 Richard Cordray is over his head in that agency with no data mechanics logic.

This is very serious with Blue Cross and they have other battles as well.  They also have sunk in $100 million to create what is called an HIE, a facility that allows hospitals to sore and share records between hospitals.  It's not going to be a go now you can almost best with Cal Index.

Here's my campaign on indexing and licensing all data sellers at the link below, so we know who they are.  If the files in fact are now in China, well they could be repackaged and sold both there and here.  The danger of course is that companies without knowing could be buying breached and flawed data.

Remember in the bulk data selling business, they don't care and flawed data gets the same price as good data.

At the campaign page you can read about myself getting an offshore call about participating in a "blood thinner" clinical trial.  They had all my information when they called my but there was one big problem, I don't take blood thinners and never have at all in my life, so the data was flawed and I don't know how many times I have been sold and resold on a list of people who take blood thinners.  This is where we do not want any of this data outside of medical records and clinical data to be used.

The need is now two fold for licensing, one to help us consumers track down and get the flawed data fix and this is growing all the time with sloppy data work, I see it all the time. The second reason is to make sure that data sold or linked contains a license reference so the buyer is not accidently buying breached and stolen data. Also the thieves could do all kinds of damage and flaw more of it on purpose if they wanted.

I have been beating this drum for 3 years now to pass a law that requires licensing for data selling and it goes without enough attention.  Lawyers have been out in the boondocks thinking this industry could self regulate, not when you have $180 billion made

at year doing this.  Shoot Walgreens and CVS each pull in 1 to 2 billion a year just selling data and I would hate to see the huge dollars that United Healthcare and all their subsidiaries make hawking data, it would be a lot larger than Walgreens or CVS as they are like the #2 or #3 healthcare data seller entity.  You can see that all over various reports that have been on the web for the last few years.

This is just really nasty stuff and again I hope my campaign catches on real soon as I'm making a big stink about it as I started writing the FTC and a few members of Congress three years ago.  We do need a law and the FTC needs that law to take more action as well.  This is an interesting page to look at, a visual of all the hacking going on in the world from Norse.  Take one look and you'll see how busy the hacking world is out there, screenshot on the right here.

On thing for sure, Anthem might have to cut back on their Stock Buy Backs as this will prove to be very expensive.  Like I said they want some of this multi billion dollar action and they could sit on it for months or a year before they might swing into action, when the heat blows over.  This is a different type of hacker who doesn’t want to be found really, they want money and are not out pushing a cause.  You think Anthem now might give security more attention and spend money there versus buying up our credit card transactions to see what size clothes we buy (and of course any other data that’s present).

Insurance Companies Are Buying Up Consumer Spending Data-Time is Here to License and Tax the Data Sellers-As insurers Sell Tons of Data, Gets Flawed Data When Data Buyers Uses Out of Context Too

Enjoy this video below …it’s game called Data Dealer….but it’s also reality…think Anthem stolen data…this is what the crooks want…and why we need to license all data sellers so we don’t have stolen data mixing in the mainstream and to give consumers an idea on where to go look to find flawed data reported about us to correct.