Nobody wants a DUI for being under the influence, and especially during the holiday season coming up, but this physician went the limit as 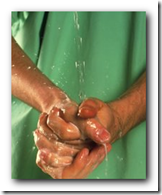 far as trying to explain how all that alcohol just happened to get in his system!  He said it was the handwash!  Good try but no dice here.

There have been stories of people ingesting handwash and getting intoxicated in prison facilities, etc. and some of the product has had to be removed, but good grief, do you also maybe value your stomach?  Obliviously this physician had not been ingesting the handwash, but rather felt the over use it it was trying to do him in, perhaps if he feels this is a real issue maybe some good old soap and water might help, anyway, somewhat amusing article on the lengths some folks might go to when exceeding their own limitations.   BD

A New Zealand doctor has been convicted of drink-driving, despite blaming an alcohol handwash he used at work. Ian Denholm, 53, had pleaded not guilty to the charge, saying the surgical handwash put him over the legal limit. The orthopedic surgeon has been fined $275 (£180) and had his license suspended for six months by a Wellington court.

The doctor claimed his eczema provided an extraordinary ability to absorb alcohol in the hand wash gel he used to scrub up after operations.

The judge agreed to postpone his license suspension until 23 January as Denholm is the on-call surgeon over the Christmas holiday season.