Sepsis is  a systemic inflammatory response to infection which can progress to circulatory system dysfunction, multiple organ failure, and eventually death. Severe sepsis is common, with over 750,000 cases diagnosed in the United States each year. It is the tenth leading cause of death worldwide, killing approximately one person every minute.

When you see the picture your heart goes out, she had a kidney stone 2 months prior and it appears an infection developed and later she was back with Sepsis developing.  I am not an expert on the never never laws by any means, but now there’s a law suit and now the inquiry to determine if this had been preventable, so I’m sure there will be more forthcoming, but it appears to have occurred before the law went in to place from what the story states, but at any rate there’s a possibility in addition to the lawsuit that this could come in to play.

Be sure to visit the Related reading section to see what Vanderbilt is doing with technology as related to Sepsis.  The university has built some very state of the art technology to alert clinical staff at the onset of Sepsis almost immediately.  BD 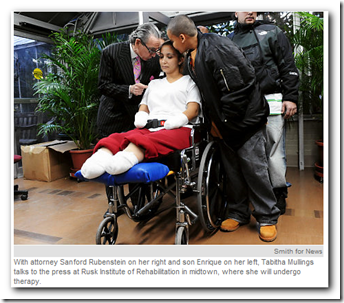 A New York City woman is suing a local hospital after her lawyer says a "medical mistake" led to the removal of both her hands and her feet, the New York Daily News reported. Quadruple amputee Tabitha Mullings was released from Brooklyn Hospital  Center Friday, where she originally was admitted two months ago for a kidney stone.

Mullings was given painkillers and sent home, but an infection that went untreated blocked blood flow to her hands and feet and she lapsed into a semi-coma for two weeks, according to the News. When the 32-year-old mother of three awoke, she said doctors told her they had to amputate both her hands and both her feet, the paper reported.

Mullings also lost sight in one eye. Mullings is suing the hospital for $100 million dollars and said she was never given a blood test to check for the infection that led to her amputations

Dr. Crounse at the HealthBlog from Microsoft has also provided a post with a video that goes into more detail on how the the Vanderbilt Server 2008  system works and how lives can be saved.

You might also guess that something of such high significance will also be finding its way into the hospital record systems very soon.  BD

“Software saves lives!  That is the promise of a solution called the Patient  Safety Screening Tool for Sepsis at Vanderbilt.  Researchers, clinicians, developers and partners came together to create the Web-based solution that is now being tested.  A variety of Microsoft development tools and applications were used.  Microsoft architects and AOI developers also designed the PSST for Sepsis to be a modular solution so that the infrastructure could easily be reconfigured to screen for and manage other types of acquired diseases.”

This solution is being made available to other hospitals and will soon have a peer to peer review out soon. This is one very good reason in itself that we can’t afford to lose funding and money today for our hospitals.