This technology is amazing.  I have included a video from YouTube that is home made and not related this this patient or case,  but shows the procedures used with the machine and how the unit and dressing is changed.  The cancer was so rare that it has only been seen twice at the M.D. Anderson Center where he spent 6 weeks.

The funny part about the story is the fact that the patient had purchased some stock in the company a while back for actually needing the device to help with the surgical recovery from his operation. BD

A few years ago, Steve Bayless bought some stock in an upstart biotechnology firm that brought him a handy profit when he sold it a few

months later. Little did he know the company one day would play a major part in his recovery from a rare type of cancer.

After complex surgery to remove tumors caused by a type of appendix cancer called pseudomyxoma peritonei (PMP), Bayless was left with a 13-inch incision wound reaching from his bladder to his breastbone. Then, he suffered a wound infection that required his entire incision be opened. 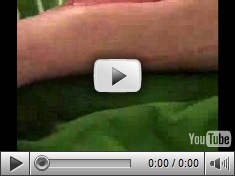 With Wound V.A.C., a foam surface dressing is applied and sealed with a plastic tape-like sheet. A pump applies negative pressure to the wound, removing fluids and other materials that might enable infection to progress. It maintains optimum moisture level for healing, draws the edges of the wound together and, most importantly, encourages more rapid growth of new blood vessels.

When Bayless was released, he was given a portable Wound V.A.C. that worked on rechargeable batteries. Sponge changes were required three times a week. When the unit was removed three months later, the wound was almost completely healed.