Safety and Effectiveness of Using CyberKnife on Prostate Cancer

When it comes to cancer today there are many different options to look at and discuss with your physician as to which option, depending on your diagnosis and condition would be the best plan, but as this article states, we really won’t know how effective some of the new technology really is until enough time passes to gather such.  Under related reading I listed a few other posts that relate to other prostate cancer treatments that are available or being used perhaps in a clinical trial surrounding. 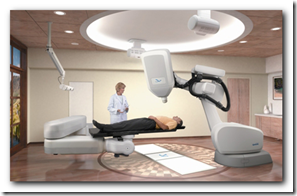 In looking at the CyberKnife page, there are several additional add on options that can be included, as well as the software required to analyze and create images and reports.  It is also used for treatment of other types of cancers.  As the article states, the Medicare reimbursement for a physician is $1200 for each patient that undergoes the treatment process and it involves 4 to 5 visits with radiation intensified in the cancerous areas, hopefully leaving otherwise healthy tissue and organs untouched.  The treatment time certainly is something that any patient would think about compared to some other alternative treatment plans just simply due to the lesser amount of time needed.

Again, one of the biggest concerns here is the lack of time an information, are patients being cured and time is about the only method that will allow to gain the statistical information needed for studies to be compiled.  On the other side of the coin, there’s the questions of whether or not the treatment is being oversold, with advertising on radio, billboards, etc. as mentioned here with billboards flooding the highways in Florida as an example.  Just like many procedures out today, there’s always the question of insurance and Medicare coverage, some will cover, others will not as it does run a bit more than other treatments.  Just recently in the news the offices at CMS were rallying to try and do some cost management to be able to make decisions on what they would or would not cover, in essence removing this decision process from the advice of the physician treating the patient and only covering the cheapest option, which in turn would be disastrous at it would serve the purpose of putting such technology out of the reach of many patients diagnosed with cancer and needed treatments as such. 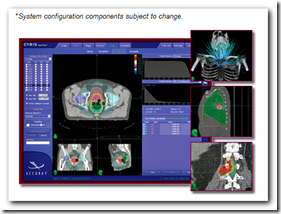 Similar types of treatment therapy are also being used in the treatment of breast cancer such as the MammoSite , and again the same question arises, is it a cure and the need for more time to pass to gather the needed data.  On the other hand not to approve and get some of the new technology out there, would a shame as well.  So much of this is still a science in essence and until there is enough time to substantiate the clinical documentation, it will somewhat still be an opinion or guessing game to a degree.  In the meantime, who knows what might appear on the horizon tomorrow?  BD

When Georgetown University Hospital bought a new high-tech system in 2001 to treat patients with radiation, doctors at first used the computerized, robotic device only for brain and spinal tumors that would be difficult if not impossible to fight any other way. But Georgetown, along with Virginia Hospital Center and others around the country, is now aggressively marketing the $4 million machine, known as the CyberKnife, for early prostate cancer, one of the most common cancers. That trend has sparked an intense debate about whether it represents an important advancement or the latest example of an expensive and potentially profitable new technology proliferating too soon.

The CyberKnife enables men to complete treatment in just four or five sessions by much more accurately delivering about quadruple the usual dose of radiation each time. Doctors inject four tiny gold cylinders into the prostate to create a precise target. The patient lies on his back for each one-hour session as a robotic arm swivels around to shoot dozens of beams from multiple angles.