Two standards of wireless were agreed upon this week.  As you can see from the information below, more medical devices are on the way, all with

reporting functions.  One I have mentioned before is the blue tooth inhaler.  This may also stand to change the way some medications are developed as well.  Recently an insulin inhaler has been submitted to the FDA for approval, so perhaps we may see more drug delivery methods developed in this fashion, one for convenience and two for compliance.

There are 2 healthcare providers on the committee and of course, compliance on taking medications is on everyone’s mind.  The inhaler will provide reminders, and a full data trail report on when the device was used.  This again is a good reason to start a PHR, as data gathered needs to be under the control of the patient to be able to share where desired and not sent to payers who in turn could use it against an individual who maybe missed a “puff”.

Aetna had a pilot program with a device that included a lottery if “you took your pill” that connected to a device that monitored compliance.  Compliance is on everyone’s mind, but again, keeping it under the choice of the patient and knowing where the information goes and how it will be used is important.

Claims and payments have been reported as well as legal cases for accidental omission of small health items when reporting medical history in the past and probably are still happening.  If used properly and alerts designed to not be disruptive, the devices could prove helpful.  Medtronic recently spoke about insulin delivery with reporting functionality, good informative video.

The solution lies within a PHR where you the individual can make those choices rather than signing a waiver and having them made for you, which is what will occur if participation levels do not tend to increase, so go get your PHR and take control.  There are some very interesting and sophisticated products on the market today, even a Bluetooth inhaler that reports back to when use it, pedometers that track how much walking 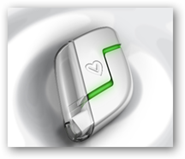 you do, and even other devices that track how much you walked and how much sleep you get every day, so be aware that these are out there and they will begin appearing in some form or another.  There is also a new device for inhaling insulin going to the FDA soon for approval, so will there be a reporting data attached to a device as such if approved?  These devices will vibrate, buzz and alert you too if it determines are you not moving enough too.

There are other devices too, recently mentioned was the application that works with an iPhone to measure your activity for the day.  You can read more at the link below.  There needs to be a balance on how and where devices are used to create better health and not end up with a big brother effect, that in turn will end up defeating the purpose for the sake of just saving a few dollars. 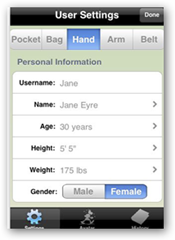 I also see this study playing an important role too in how devices are brought into the world of healthcare, from UCLA.

There are also devices that can collect data from other devices who send data too.

The devices are making their way into healthcare and hopefully with proper implementation we can benefit and the key again is the consumer authorizing use and having a copy in a personal health record first.  BD

The not-for-profit consortium, touted at its launch in San Francisco in June 2006 as the “convergence of the healthcare and consumer electronics industries,” set as its primary goal the development of a set of nonmandatory, consensus guidelines for data transmission that all home health medical-device makers could and should adopt.

Cnossen, whose day job is with Intel as its director of personal health enabling, said he hopes that at least 10 Continua-certified devices will be on the market by year-end. Cnossen said he thinks that there will be at least one device in each of the five key product lines. A second version of Continua guidelines covering wide-area-network communications could also be ready by year-end, he said.

Pamela McNamara, president of U.S. operations for Cambridge Consultants, Boston, said that with the wireless system, “individuals can track themselves. The inhaler device is programmed to give a reminder to the patient to take a puff and records the puff and transmits it via Bluetooth to a portal so it can be tracked.”
On the receiving end of the transmission could be the patient’s own personal health-record system, a caregiver—the parent of a child who is a patient, or, conversely, the adult son or daughter of an elderly parent who is the patient—a physician’s EHR, or a monitoring service.

“We’re also coming on to the Version 2 standards coming out this year with a peak-flow meter and a medication monitoring standard that’s emerging for devices such as the asthma inhaler.” The peak-flow meter tells asthma patients how much air they are moving in and out of their lungs.

Congress Plans Incentives for Healthy Habits ,Wellness Programs, and Devices? How Potentially Intrusive and Disruptive Will It Get to Save Money?

Employers in search of ways to help keep health insurance costs low – How far will it go?