First of all great kudos to Jim Edwards at BNET for some great investigative reporting here.  Being a female and I’m sure other women will appreciate this knowledge as well.  If not for his article, which you can read in full at the link at the bottom of this post, nobody would have ever been aware of the recall.

Look at the link to where the notice was placed, again good investigative skills here in finding this he goes on to say relative to the lawsuits that even the attorneys

who are presently suing Bayer had not a clue that the recall existed but I’m sure they may add some additional information here to the case based on the recall information.   Being we are all consumed with the over the counter recall that took place last weekend from J and J, I thought this was definitely worth the mention, especially to all my female readers here.

Now while all this is going on Bayer gets another birth control pill, Natazia approved by the FDA.

“The use of Natazia is associated with increased risks of several serious conditions including venous and arterial thrombotic and thromboembolic events (such as myocardial infarction, thromboembolism, stroke), hepatic neoplasia, gallbladder disease, hypertension, ruptured ovarian cyst and uterine leiomyoma.  The excess risk of thromboembolic events is highest during the first year of use of COC.”

Also I might add that last year Dr. Erika Schwartz and I had a discussion on hormone replacement therapy and she warned about some of the new contraceptives on the market and that a good treatment plan with bioidentical hormone therapy is all that is needed, and we are still waiting for some studies comparing the Premarin products, made with pregnant female horses as compared to bio identical therapy which has been stated to be safer and less risk for being at the root of causing breast and ovarian cancer.  We don’t know for sure and we would really like some additional information to pick up where the Women’s Health Initiative left off as they did not distinguish and grouped Premarin and bioidenticals all in the same group when warning women of the cancer associated risk.

“Dr. Schwartz stated that with some of the new drugs and side effects shown, they tend to possibly be “messing with your system” too much with chemically interfering with ovulation, when all that is necessary is a good hormone treatment plan, exercise, a good diet and some supplements or vitamins to keep you on 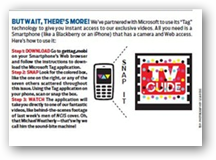 One more note as I do on every recall post, I reference the Microsoft Tags so we could use our cell phones and easily identify any recalled products or at least get information and a link to the website easily enough.  As Jim pointed out, this is a perfect example of a recall that went unnoticed and was important, or should I say it’s important to all the women out here.

If you want to see how this technology works, download the free software on your Android, BlackBerry, IPhone or Smart Phone and check out TV Guide magazine, just shoot and aim with the phone all the information is at your fingertips.  Some General Mills food products in the grocery store also have Tags and you can create your own tags too, I have a couple here on the site that I made. 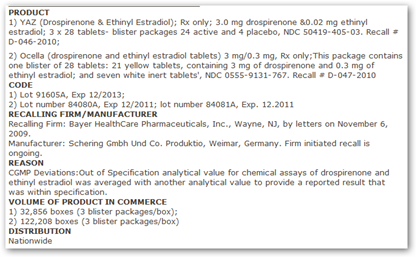 While searching on the page I also found this, a Prempro recall underneath the Yaz notice.  It’s not as large as the Yaz recall but still substantial with several thousands of cartons of dispensers.  BD

Bayer (BAY) is being sued in 1,100 lawsuits alleging its best-selling product, the contraceptive Yaz, carries a higher risk of blood clots, so you’d think that when the pill was recalled, it might have generated some headlines. But it didn’t.

In fact, the FDA did issue a recall for Yaz back in November 2009 (scroll about halfway down to see it). The reason: Bayer had reported the product was “within specification” when in fact it wasn’t — the company had taken a number of measures and averaged them together to get the number it needed. And no one noticed.

The recall is significant for a number of reasons: First, it involved specifications for the dosage of drospirenone in the pill, which is the new ingredient that the lawsuits allege is more dangerous than the traditional recipe.

Third, and perhaps most significant, although the recall was dated Nov. 25, the FDA inspected Bayer on this same issue in March 2009  — and warned the company about its averaging practice in August 2009. The unanswered question here is, How many out-of-spec pills did women take before the product was recalled?

Did You Know the FDA Recalled Bayer's Yaz Contraceptive? Neither Did Anyone Else | BNET Pharma Blog | BNET