This is some really amazing technology from Second Sight and there are 2 parts, the implant in the eye and the base unit worn that converts images captured by a

miniature video camera housed in the patient's glasses into a series of small electrical impulses.  The images below show how this works.  The impulses stimulate the retina cells that remain and end up with patterns of light in the brains.  The patient needs to learn how to interpret the patterns, but some vision is gained.  The device has not been FDA approved for use in the US.  Clinical trials ran for around 4 years.  Back in March of 2009 I posted about the man who had 30 years of no sight, so indeed a bit of a miracle for many possibly.  BD

The Argus II Retinal Prosthesis System ("Argus II") is designed to bypass the damaged photoreceptors altogether.  A miniature video camera housed in the patient’s glasses captures a scene. The video is sent to a small patient-worn computer (i.e., the video processing unit – VPU) where it is processed and transformed into instructions that are sent back to the glasses via a cable. These instructions are transmitted wirelessly to a receiver in the implant. The signals are then sent to the electrode array, which emits small pulses of electricity. These pulses are intended to bypass the damaged photoreceptors and stimulate the retina’s remaining cells, which transmit the visual information along the optic nerve to the brain.  This process is intended to create the perception of patterns of light which patients can learn to interpret as visual patterns. 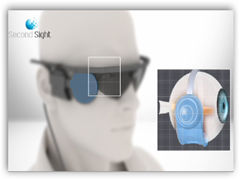 approved for sale in Europe. The approval follows a successful clinical trial that ran for almost four years and saw more than 30 patients around the world using the device at home as they went about their daily lives. While the system isn't able to restore normal vision, the majority of trial subjects gained the ability to perceive colors, recognize large letters and locate objects, while two were even able to read short sentences.