This year I was asked to speak at the e-MDs annual meeting and discuss the ever so popular topic of social networking.  It was a great experience and hopefully I

added a little valuable information on the topic.  It is a challenge as the technology keeps changing and privacy of course is a bit concern in this area as well.  Disclosure: e-MDs advertises at the Medical Quack website which you can see in the resources column on the right.  Back in April of this year e-MDs was selected as the EHR vendor by the Medical Society in New York.

If you are not familiar with e-MDs they are a long standing medical records company that was built by doctors and is still run by doctors, who better to create a system that is user friendly for the end users.  e-MDs has always had a big focus on the 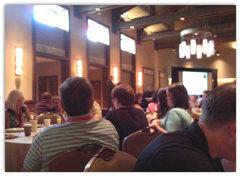 independent practice and that was very well observed by me at the meeting, not to say that other larger firms were not there as they were, but the number of doctors and their staff from smaller firms present to learn and update at the annual meeting was well represented by all means.  The big focus was on Meaningful Use, which is close to heart to all in health IT as this is where the government incentives come in play with qualifying and attesting.  Going back in history a short while you may remember that an e-MDs client received the first US stimulus check for medical records not too long ago.

I had a bit of time in between sessions and just took a lot of time to talk with e-MD employees and attendees throughout the couple days I was there and had some really great conversations.  One item in particular I inquired about was about the software development and how many employees the company has dedicated to the ongoing processes and one employee said I think half of our employees are developers which may or may not be correct but the statement alone indicates to me that there’s a lot as I would think is indicative of any medical record company today.

During the break out times or any time when 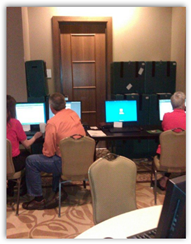 ongoing sessions were not scheduled attendees could visit the live lab and there were always employees right on the spot to sit down with anyone who came in and help with questions, etc. right at a live computer, so there was a lot of learning going on with a very busy lab.  One other item that I found very impressive too was to see employees and other family members working at the company as you don’t see much of this today and many stated they were so happy to be able to have their son or daughter be able to come to work at e-MDs when finishing college, and believe me everyone was truly motivated and “liked” their jobs.  In addition I found they have an intern program that also helps others with placement in the health IT business.

Some of the most interesting conversations too were just talking to clinics on how they do business and function and being from California I was very interested just to listen and learn more about how healthcare clinics and doctors function in other states and I heard quite a bit.  Some of what I heard was a bit concerning when listening to how some clinics had doctors who saw 100 patients a day and worked 8 am to 8 pm shifts but it was what they needed to do to serve the community and of course keep the business rolling.  That one conversation was one that I won’t forget for a while, and the fact that they were not complaining but rather were there to learn and take in everything they could to improve how they function was amazing.  If that were me I would be probably complain but I mention this as an example of the hard working resilience of clinical workers today and you may not always see the time consuming administrative work that goes on outside of the waiting and exam rooms, but it is there. 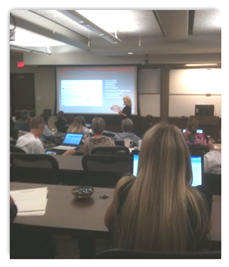 interaction and there was no shortage of questions by any means.  On purpose though I took a couple days away from the social networks as we all need a break here and there but found several tweets referencing the discussion on Twitter from others.  There was a live Twitter board showing all the updates occurring during the convention which was nice.

I think during the discussion on Social Networking we came out with some pretty good guidelines as to how and which social networks were of value and when to use them to either grow the practice (Facebook) and better communicate with patients and when to use LinkedIn as an example to grow relationships with hospitals and other clinics from the business side.  I also briefly touched on a few other networks that are out there such as Quora and the new Google Plus offerings.  My same old words of wisdom were quoted as well, “what goes on the internet, stays on the internet” so think of everything you contribute as being public information for anyone to grab and use it wisely and remember HIPAA.

In addition privacy was always in the spotlight with many of the conversations I had and if you this blog often enough then you know I’m all over that topic myself as well. During my presentation, I had Dr. Deborah Peel in the audience from the Patient Privacy Rights Org and afterwards she and I had some great lengthy conversations and compared notes from each of our perspectives too.  We talked quite a bit and I think we both benefited greatly from the exchange and I learned a lot about the Patient Privacy Rights Organization and their efforts.  I have much of my focus here at the Quack with how technology affects and changes the privacy factors we deal with and Dr. Peel also had an extensive background in this area too growing up with a father who was a computer science professor so she also was very well versed in that area with growing up with real in house expertise at home growing up,  and again we had some great conversations and exchanges going on.  You can see Dr. Peel quite often in the news today with patient privacy concerns in the New York Times and other major papers quite frequently.

Many of the e-MD clients make it a point every year to attend and again it is not just the doctors attending, key staff members were also there with large presence and I really enjoyed the conversations I had with all.  One topic that came up quite a bit though in so many conversations though was MD compensation with insurers and I don’t I found anyone who was content on that issue and I might add for good reason and I think you would find that conversation prevalent at any healthcare meeting in the US. 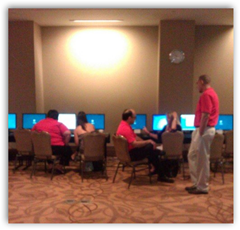 way around and were there to help and assist where ever they could.  The old stymie of the old stuffy “corporate” atmosphere was not here but rather the focus was on people helping people, which is what it should be and again I found this so refreshing.  I have attended tons of meetings and so forth over the last few years and this was great to see a company that focused on “people” and how to work with systems rather than systems running the people, which I see so much of today in other meetings.

e-MDs was founded by Dr. David Winn, a doctor who wrote some code years ago and started the company as one of the first medical record vendors in the business.  The CEO is Dr. Michael Stearns we had a great exchange as well on many topics to include privacy as well.  Everyone was so accessible for communicating and one thought I walked away with is that e-MDs works hard to create software with the doctor’s focus in mind, in other words their product is created to be what the doctor has ordered and not developer and payer oriented  only.  I see of that today and in just doing this blog with many doctors addressing the concern with complicated systems that may not focus on the ease of use and make sense with how a doctor does their job.

A couple years ago I chatted with Mike Naimoli from Microsoft Life Sciences and put out a post about how doctors have become the biggest “named” group of software beta testers and he agreed with me whole heartedly on that comment, so again this goes to show that design and ease of use has to be a big part of the medical record program.     In summary it was great to participate and be able to share a little bit of knowledge and furthermore take in a lot of knowledge on my part as well.  There’s not a day that goes by with the medical records business that I don’t learn something new.  If you are an e-MDs medical record user, I think this is an event to mark down on your calendar for next year as you won’t be disappointed and again thanks to e-MDs for the chance to participate and attend!  BD