Home » My Commentaries » Other Items of Interest » Technology » Edward Snowden Christmas Message: ”Privacy Matters And Allows Us To Be Who We Are and Who We Want To Be” (Video)

Edward Snowden Christmas Message: ”Privacy Matters And Allows Us To Be Who We Are and Who We Want To Be” (Video)

This is the Christmas message delivered to the citizens of the UK on Channel 4. 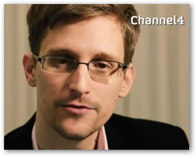 If you have been reading the news, Snowden says his work has been done, with brining the awareness to the forefront.  He still has more documents he could release but I don’t see any more of consequence to be released unless someone turns the heat on him.

If you here often enough then you the Medical Quack is privacy advocate and how frustrated I get with businesses and banks and their efforts that thwart our privacy as actually they reach out and touch you every day, where as with the government they decided when they might, but still both issues are important and we need privacy.  Snowden makes mention that a child born today won’t even know a world without privacy, which is true with how technology has evolved.  If you go back to the case with the former Goldman Sachs programmer and how bungled all of this has been, you can see the point Snowden is making here and he had to act because Congress could not he was quoted saying.  The link below shows the digital illiteracy of the FBI, admitted by the agent and it’s not much better at the DOJ or with Congress.

I very much agree that Congress forced his hand as I have blogged for about 2 years about a couple items Congress could do to help themselves and it comes back to education and knowledge.  For the life of my with the complex times we live in today I don't know why they in Congress seem to feel they know it all, as I'm in tech and I certainly don't so it boggles my mind why they stick with old perceptions out of the 70s or 80s and keep functioning that way while so many in the country, once you get past the OMG news that helps journalists keep their ratings, see it loud and clear.  I have done many intellectual posts on this topic with ideas and not just a rant.

out to explore the huge research and modeling tools it has to predict unintentional consequences when creating laws.  Read the two links below on how Congress could be helping  themselves.
http://ducknetweb.blogspot.com/2013/09/jon-stewart-discusses-little-paper.html

You will never get them all but between having Watson or a comparable tool that can use speech recognition, even the lowest tech common denominator we elect can participate.  Here's what they are...and again when help is there, you do wonder why they stick with old nonsense perceptions that simply are not true today.  Read the link below and see how you get duped today.  I included this link as duping is part of privacy violations.  BD

Wednesday, December 25, 2013
My Commentaries , Other Items of Interest , Technology