Let’s face it the journalistic world is full of writers out there that go to the extreme to suck you in and get you mad so they get a lot of comments and their ratings go up.  That’s what this sounds

like and he could Beck and Limbaugh with this speech he gave here.  Sounds like just a spoiled brat by all means the Daily caught it.  Not too long ago Forbes media said they were for sale and they do have some good columnists there too and not all are like this out of touch bonehead but they are doing more “content farm” articles to where an algorithm writes some of their stories.  If you have followed their real “human” talent you can tell the difference and they are not alone as there’s others out there in the “content farm” business.  I dread the day when all I get to read is algorithmic news.  Google has already told me a while back that my real name was not machine compliant so if you are stating a family and want the kids to use Google, start checking out “machine compliant” names for your kids.

Here’s the link if you want to read the story on how their algorithms just suspended my account and said I was a real “duck”…the machines had not learned enough yet.  The story has rolled all around MIT and Engadget and the best part was that they had to ask me to verify myself on the web and yup I was not hiding out right their noses on Google Blogger…had a lot of comments from Microsoft and other tech companies on that one 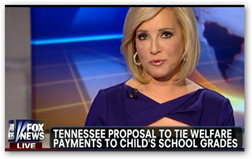 Thank goodness we have the Daily Show to help sort all of this out for us!

Private charities will fill in where the government leaves off he says…sorry not seeing that, look at the Silicon Valley and their homeless and people who need help right under their noses and we don’t see it in New York either.  Then you can watch here the news story on school grades being tied to welfare payments.

Jessica Williams did some great satire here with her videos after the Tamney interview, but sad that a lot of this is staring the US government right in the face.

Anyway Tamney is certainly out to lunch and is a big bad ass with his ideas and perceptions, either that or he’s going the same route many are doing today with going to any extreme to get ratings by chomping on your emotional jugular vein.  BD

On the December 17 edition of Comedy Central's The Daily Show, Forbes columnist Tamny spoke to correspondent Jessica Williams about the $5 billion recently cut from the Supplemental Nutrition Assistance Program (commonly known as food stamps). Tamny told Williams, "If I were in control, I would abolish SNAP all together. I think food stamps are cruel." He added, "I don't think anyone is happy if they're reliant on someone else, if they're taking a handout."

Tamny argued that if people were "literally starving," a "massive outpouring of charity" would "make up for that fact":

Wednesday, December 18, 2013
Medically Related , My Commentaries , Other Items of Interest