Is this a great story or what?  Listen to the video and read below about his past, pretty grizzly so he’s off his rocker to begin with.  He earned his money the old fashioned way, he inherited it.  He was recognized as a regular patron at the store.   BD

A New York City real estate heir acquitted of his neighbor's murder a decade ago is back in trouble, this time for a bizarre 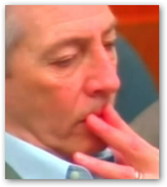 outburst in which police say he urinated on a rack of candy at a Texas drug store.

Police say multimillionaire Robert Durst unzipped his pants in a Houston CVS, exposed himself and then urinated on a cash register and candy before walking away from the store just after noon Sunday, Houston NBC affiliate KPRC reported.

He had left the scene by the time police arrived, but on surveillance video he did not appear to have been agitated or argumentative before the incident, police said.

Durst had been arrested in 2001, jumped bond, was found in Pennsylvania trying to steal a sandwich and a Band-Aid from a grocery store and eventually faced trial in the murder. He claimed he had shot Morris Black in self-defense during a struggle over a gun, according to the Houston Chronicle.