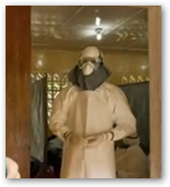 or Vitas for any information and expect even a small degree of accuracy these days.  The doctor is only 33 years old and this is sad indeed as he’s giving him time and effort to help people with this deadly disease.  His family had been living with him there but are now back in the US and I’m sure they may be subject to all types of medical tests if they have not been already.

The doctor has been in Liberia since October of 2013.  Between 60 and 90 percent of patients die so we wish the best for sure and he’s being treated.  The bad news too is that there are other healthcare workers coming in who are infected as well.

Dr. Brantly has been admitted to a Samaritan’s Purse isolation center at the Eternal Love Winning Africa (ELWA) Hospital in Monrovia for treatment.  Ebola is spread through bodily fluids and thus healthcare workers are a big risk with being in constant contact.  BD

A Texas doctor working with Ebola patients in Liberia has now tragically contracted the disease, adding to the list of health workers who have been infected with the deadly virus as a result of their work.

Dr. Kent Brantly had worked as a family practice physician in Fort Worth, Texas before traveling to Liberia to work with ebola patients, the Associated Press reports. Brantly went to Liberia as part of his work with Samaritan’s Purse,

an evangelical Christian aid organization founded in 1970. Brantly, 33, is a husband and father of two.

Brantly is one of several health workers in Western Africa who have contracted the ebola virus as a result of their work. Dr. Sheik Umar Khan, Sierra Leone’s chief ebola doctor, contracted the disease last week, after giving an interview to Reuters saying how he feared for his life because of his work. Dr. Samuel Brisbane, one of Liberia’s senior ebola doctors at the country’s largest hospital, died Saturday at a treatment center on the outskirt of Monrovia, according to the Associated Press. Brisbane was the first Liberian doctor to die in the outbreak that has killed 129 people in the country, the World Health Organization said, according to the AP.