Here’s a tale of one more state insurance exchange and the same old insurance company subsidiary cashing in again. 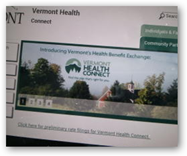 I find it hard to believe that there’s nobody else out there that can handle the data issues.  Here’s almost another 6 million to fix the system, not to mention 100 people also working in a call center as well as supervising other contractors in the call center.

The system as it stands is that once you are in, there’s no changing anything and that’s one of the main projects here as now it’s all done manually.  The state is not sure if it will be ready by November 15h either and we know how that goes, just depends on how long it takes the coders and programmers to fix what’s there.  BD

MONTPELIER -- The head of Vermont's health care reform effort says he does not believe one of the basic functions of the state's online health care exchange will be fixed in time for the open enrollment period for insurance this fall.

Thousands of people are unable to fix mistakes or change their coverage online through Vermont Health Connect, and Lawrence Miller, the head of health care reform, says the state needs to put contingencies in place.

The $5.7 million contract asks the contractor to eliminate the backlog by Aug. 1, a deadline Miller said would likely be missed - in part because new people continue to trickle in to the system with a similar error rate to those who signed up for insurance through the exchange last year and earlier this year.

Optum has more than 100 people working in an overflow call center and was instrumental in developing a process to expedite changes that could hinder someone's access to coverage. The contract also charges Optum with reviewing the work of other contractors, such as CGI, Exeter and Maximus, which operates the main call center.