This is kind of sad with this recall as many who wear them depend on the units.  In addition the Cochlear technology is also being used to test for balance disorders with new implant procedures at the University of Washington. 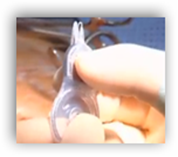 There is one other company I am aware of, Esteem who received FDA approval last year for their implanted product and so far no recalls there but the approval from the FDA just came in March of 2010. BD


MELBOURNE—Cochlear Ltd., the world's biggest maker of bionic ears, on Monday recalled its latest range of hearing implants after a recent unexplained increase in failures.
Cochlear shares plunged as much as 27% after Chief Executive Chris Roberts said the company has stopped manufacture of the Nucleus CI500 range, which in the 2011 fiscal year made up 70% of the company's sales of implant units.
Analysts said the recall could lead to prolonged market share gains for Cochlear's competitors such as the Austria-based Med-El. Cochlear has about 65% of the global hearing implant market.
"Reliability is very important," Mr. Roberts told analysts on a conference call. "If there's some things happening that we don't understand, we're far, far better to stop and understand it...rather than just battle ahead and hope it all works out."