Everyone talks about disruption being good, well not always.  A medical error was made by one of the contracted nurses filling in during the strike and death resulted.  A wrong dose of medication was given that resulted in the patient’s death.  This 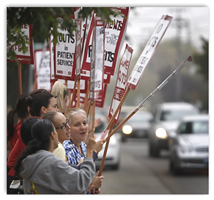 could have happened with regular employee nurses too.  There was no word on how long the patient had been there, etc. but the only advantage would have been nurses who were currently working in that area having some knowledge or having cared for that patient.

Thousands of Nurses To Strike on Thursday In California to Include Sutter, Kaiser Permanente, Berkeley Hospitals and More

We see a lot of this with nurses moved around frequently from department to department too. This is sad but again disruption in nursing is not a good thing no matter what it is.  BD

A female patient at an Oakland hospital died early Saturday due to what the hospital described as a "medical error" made while she was under the care of a replacement nurse hired during a labor dispute.

The nurse allegedly gave the woman a fatal dose of medication, said Cynthia Perkins, a spokeswoman for the Oakland Police Department. The nurse, who was not identified, was taken in for questioning by officers.

The investigations, as well as an internal inquiry, are standard procedure in an incident of this kind, said Carolyn Kemp, a spokeswoman for the hospital.

In a memo to the hospital staff Saturday, hospital CEO David Bradley admitted that a medical error was responsible for the death at the Summit campus in Oakland.

"This is a tragic event, and we have expressed our sorrow and sympathy to the patient's family," he said.

Kemp said privacy laws prevented the hospital from releasing the identity of the victim or any details about the error.  As many as 23,000 nurses at 34 hospitals in Northern and Central California walked off the job Thursday in a one-day job action. The strike was in sympathy for mental health workers at Kaiser Permanente, who are involved in a contract dispute. The nurses at the Sutter Health centers also are involved in an ongoing contract battle over proposed changes in benefits, as well as patient staffing issues.