Ok if you have not seen this on the web already today, here it is and this happened in China where the spa let’s the eels nibble away at your dry skin.  Next time wear underwear is what I would say, a nice pair of speedos would keep the eels away.  The surgery took 3 hours and to remove from the 56 year old man’s bladder.

It didn’t live though, it died in the bladder, no air.  The eel being a slippery character allowed it to swim right up through the man’s penis.  I guess from the story the man tried to stop it when it was about half way in, but again was too slippery and it got away from him.  BD

Zhang Nan was bathing with live eels to cleanse his ski 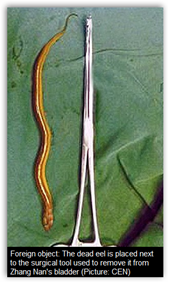 n when one rogue serpent took a liking to his manhood.

Foreign object: The dead eel is placed next to the surgical tool used to remove it from Zhang Nan's bladder (Picture: CEN)

The eel treatment in question is a similar concept to the popular London spas that offer fish pedicures.

Thinking that the eels would make him look ten years younger, Nan dived into the water and let them feast upon layers of dead skin.

But after laying in the spa bath, Nan felt a sharp pain and realized a small eel was working its way up his urethra and into his bladder