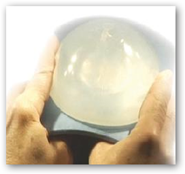 much until one paintball shot hit the bulls eye.  Its either that or don’t play Paintball if you have artificial boobs is what common sense tells me here.  Just the thought of an implant covered with paint is not particularly something anyone might want to see.

Interesting too here in the article too about a doctor working on “adjustable” implants with an implanted port that allows for adding or removing saline, so if you have a hot date and want that “extra” affect, just pump in some saline it appears:)  Back in September of 2009 there was a real popular clinical trial for saline implants and I don’t know what the results are or if this is still ongoing or not, but gee enough about this topic already and if you have implants and play Paintball better use some common sense and protect them.  I guess if the technology advances to where you can adjust, you could just drain them before going to a Paintball match maybe?  BD

Plastic surgeon Dr. Jennifer Walden of New York told ABC News that implants can withstand 20 times the pressure exerted by a mammogram machine, but a speeding paintball can “damage not only implants, but bodily structures such as eyeballs, breasts without implants, cheekbones, etc.” She recommended that women protect that “assets” by wearing protective vests.

Doctor develops adjustable implant: Plastic surgeon Dr. Jeffrey Weinzweig of Chicago has created a saline breast implant that can be enlarged or shrunk from three to six months after it is placed in a woman’s body.

During the original operation, the patient’s implants are connected to medical ports, about the size of a dime, which are placed under her skin.  If a woman wants to expand or reduce the implants’ size, Weinzweig inserts a needle through the ports to add or remove saline from the implants, he says.

The ports are then removed from the patient’s body.